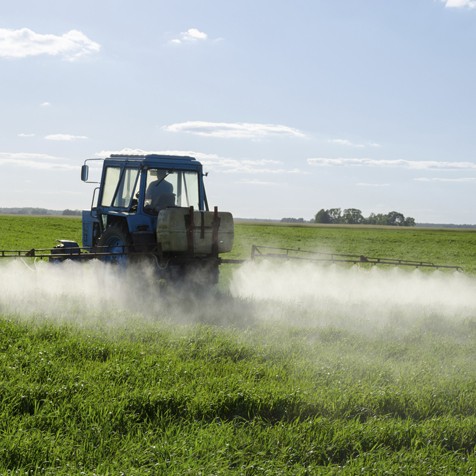 A California jury recently found Monsanto guilty of its weed killer Roundup causing cancer in a school groundskeeper. The $289 million decision has opened the door to thousands more lawsuits. Sometimes it takes a major lawsuit and settlement of an enormous amount of money to grab the public’s attention and pave the way for hopeful change.

The chemical giant Monsanto (recently purchased by Bayer) will continue to defend their products and deny any wrongdoing. You can view some of the publications that have identified Monsanto’s cover-up here and here. Likewise, consumers of all backgrounds will continue to use the product until the message like this lawsuit and risk sinks in.

Our planet's health and human health trends have changed considerably over the last 30-40 years with the now ubiquitous global agricultural, commercial, and private casual use of Roundup and glyphosate-containing herbicides. The current CDC cancer statistics determine that 1 in 2 men and 1 in 3 women will have cancer in their lifetime. Certainly, numerous factors have affected this trend, but the reality is you are being exposed to glyphosate in foods, water, and air even if it is levels that are deemed legally permissible.

Legal levels are not the same as levels that are deemed for optimal health or considered safe. This was noted by the Environmental Working Group's response to the recent findings that glyphosate has been found in some of the most popular breakfast cereals on the market – Quaker Old Fashioned Oats, General Mills Cheerios, and Quaker Dinosaur Egg Instant Oatmeal. To understand more about health risks associated with Roundup and glyphosate, take a look at recent publications.

An October 2017 research letter published by Journal of the American Medical Association/JAMA Network evaluated a sample of California residents over the course of several years for Roundup exposure. Scientists measured the amounts of glyphosate and its breakdown metabolite aminomethylphosphonic acid (AMPA) excreted through urine samples of adults participating in the Rancho Bernardo Study of Healthy Aging.

The conclusion of this study found “values were higher than in European adults. Animal and human studies suggest that chronic exposure to glyphosate-based herbicides can induce adverse health outcomes. Animals consistently fed an ultra-low dosage of the herbicide with a 50-ng/L glyphosate concentration show hepatotoxicity consistent with nonalcoholic fatty liver disease and its progression to steatohepatosis. In July 2017, in accordance with the Safe Drinking Water and Toxic Enforcement Act of 1986, the state of California listed glyphosate as a probable carcinogen.”

Research publications demonstrate several effects in various scenarios. Here are some recent findings the last few months. You will find a wide range of effects.

Mitochondrial damage was found in zebra fish exposed to low concentrations of glyphosate for a period of 7 days. Cell viability was decreased. Oxidative stress increased. The most disconcerting finding of the study was that mitochondrial activity became dysfunctional. Their findings “pointed to the mitochondria as an important target of glyphosate-based herbicides.

Why does this matter? Mitochondria are at the crux of aerobic energy production. If these metabolic energy factories are injured, many things happen in the body – including increased cancer risk. Dr. Otto Warburg observed as early as the 1930’s that in cancer, mitochondria are dysfunctional.

Mitochondrial function was negatively impacted in human sperm cells exposed to Roundup. A December 2017 study evaluated semen samples from healthy men. The samples were exposed to Roundup at a very low concentration of 1 mg/liter. Within one hour of incubation, mitochondrial dysfunction and reduced sperm motility occurred. Can these studies be extrapolated to current human exposure, sky-rocketing cancer rates and infertility, and glyphosate-based herbicides? We are in the midst of a global experiment.

An August 2018 publication in the Journal of Internal Medicine Research found adverse changes in pancreatic function. Rats were chronically exposed to glyphosate-based herbicide and then examined. Blood sugar and insulin levels were both increased in the animals exposed to glyphosate. Moderate to severe degenerative changes were found in both the endocrine/blood sugar regulating part and exocrine/digestive enzymes part of the pancreas.

In this study, researchers found that rodents supplemented with high dose zinc were able to withstand the toxic effects on the pancreas. Exocrine pancreatic insufficiency (EPI) and diabetes can occur together, but it is under-recognized. Findings like this make me question this as another driving force of the sky rocketing rise in diabetes and increasing problems with poor digestion in all ages.

In addition to the growing rates of cancer and disease, autism rates have also sky-rocketed. In 2000, 1 in 150 children were diagnosed with autism spectrum disorder. In 2014, the CDC statistics showed that 1 in 59 children have autism spectrum disorder. Many in the autism community see a connection with environmental chemicals like Roundup and autism. We see this in an April 2018 systematic review study demonstrating a hypothesis for autism, glyphosate and the gut bacteria Clostridia.

There are many strains of Clostridia, most commonly known with food poisoning and C diff. Broad-spectrum herbicides like glyphosate reduce beneficial bacteria in the human gut. At the same time, non-beneficial Clostridium species are highly resistant. This connection and a search through multiple studies has led to the hypothesis for autism, glyphosate, and Clostridia dysbiosis. Their hypothesis is supported through systematic reviews which demonstrated an interrelationship between gut flora colonization of Clostridium and autism. Second, environmental exposure may adversely increase the growth of Clostridium bacteria in autistic toddlers and negatively influence the gut-brain axis.

An April 2018 study with a different focus on the brain found that glyphosate exposure during pregnancy affected the child’s brain health later in life. Offspring that experienced glyphosate exposure during fetal development experienced adverse brain health changes later in life. Oxidative stress markers were elevated with decreased brain antioxidants. Memory, recognition, and enzyme systems associated with the neurotransmitters acetylcholine and glutamate were functionally impaired as adults.

Anxiety and depression have been linked to low level of chronic glyphosate-based herbicides in animals. It relates to the effect that the chemicals have on the gut flora. By destroying healthy gut flora and consequential gut dysbiosis, mood and behavioral changes occur. Other research shows that exposure during pregnancy, offspring have higher levels of depression, oxidative stress, neurotoxic levels of glutamate in the brain, and impaired glial and nerve cell function in the brain. Does the ever-increasing glyphosate exposure together with chronic low level intake in our food supply have anything to do with our children experiencing more behavioral concerns, depression, and even suicide? You can find out more about acetylcholine and glutamate in the articles Memory Neurotransmitter & Gut Health Linked and Fibromyalgia Pain Linked with Glutamate and Histamine.

Other recent studies demonstrate concerns with uterine hyperplasia, which is a thickening of the uterus lining that may lead to uterine cancer. Early life exposure to glyphosate was found to increase sensitivity to estradiol in the uterus, which led to unhealthy cellular changes and tissue growth in the uterine lining.

Exposure to the “inert ingredients” or formulants of glyphosate-based herbicides is toxic to the sertoli cells in males. Sertoli cells are essential for testicular and sperm development. A June 2018 study in mice found that glyphosate inert ingredients were detrimental to prepubertal development and led to reproductive dysfunction in male offspring. We have seen “inert ingredients” contribute to loss of health as seen with vaccination adjuvants. Adjuvants add to the chemical soup that is bombarding life on this planet.

Exposure to glyphosate after birth in male rats was found to affect the mammary glands. Chemical exposure caused tissue proliferation and increased estrogen receptors in the tissues, i.e. breast tissue increased or as more colloquially known, it caused man boobs in these animals.

An August 2018 study in rodents, found that even the second generation was affected by low dose glyphosate exposure. This means the “grandmother” mouse that was pregnant and exposed to the herbicide, resulted in the “grandchildren” being affected. (Offspring conceived by the grandmother contain the eggs for the second generation.) Low birth weight, delayed growth, birth defects and impaired female reproduction were found in the second generation of mice. The list of concerns goes on and on for changes in liver function and DNA damage, impairment of bees and other pollinators, and more.

Meds, Toxins, and Obesity Cause Breast Enlargement in Men and Boys

Health Scandal of the Decade – Monsanto’s GMO Perversion of Food

Bug Spray: Not as Benign as You Think!

PCOS: A Metabolic Puzzle for Women, Girls, and Future Generations

Chronic low-level exposure to Roundup, other glyphosate-based herbicides and formulants are in the food, water, and air. The results cited are from cellular, animal, and some human studies with much left to be learned, but the message is clear – Roundup, glyphosate and its inert chemicals affect health for present and future generations. The food supply does not have a “glyphosate deficiency”.

The intent of the article it to empower you think twice and consequently change what you apply to your lawn and crops or choices you make with your food purchases and consumption. It may be decades or perhaps longer before this mess is fully understood, stopped, and cleaned up. We must also be diligent about making good choices for our children and grandchildren. The recent lawsuit victory with Monsanto and the groundskeeper who lost his life with cancer from glyphosate use and exposure is likely just scratching the surface. We have learned from Smokey the Bear and the personal responsibility in prevention of forest fires. Monsanto won’t revoke its claim that Roundup and glyphosate is safe, so the questions become what can we learn, change, and do to prevent glyphosate exposure and risks?