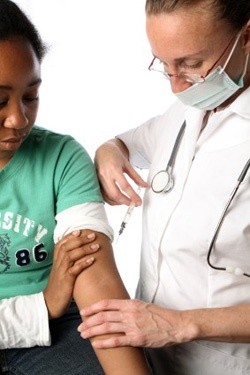 In the world of autoimmune research, there is a new diagnosis quietly making headlines. It is called Autoimmune (auto-inflammatory) Syndrome Induced by Adjuvants or “ASIA." Scientists have been studying this topic with mounting interest over the last few years as there has been a marked increase in autoimmune disorders. They are studying how there is a loss of tolerance to self, i.e. autoimmunity/auto-inflammation, and the role of environmental factors and genetics. They are putting together some very intriguing pieces of the puzzle.

ASIA syndrome was first introduced in 2011 by researchers Y. Shoenfeld and N. Agmon-Levin in the Journal of Autoimmunity. In their research, they studied the interactions among vaccines, adjuvants and immune diseases. Adjuvants are used to increase the immune reaction to the compound that you are being vaccinated against. It is intended to be helpful by enhancing and potentiating the immune system response to the vaccine. This is like adding a little lighter fluid to the gas grill you are about to light with a match. The researchers saw that four conditions: siliconosis (complication from silicone containing implants), the Gulf War Syndrome, macrophagic myofasciitis syndrome (MMF), and post-vaccination phenomena were linked to previous exposures to an adjuvant found in vaccines.

The primary adjuvant used in vaccines for over 70 years is alum, which is a mixture of aluminum salts. According to the CDC, the adjuvant aluminum is used in US childhood vaccines that prevent hepatitis A and B, diphtheria-tetanus-pertussis (DTaP, Tdap), Haeomophilus influenzae type B (HiB), human papillomavirus (HPV) and the pneumococcus infection. Up until 2009, it was the only adjuvant used in the United States. Scientists are now working on other types of adjuvants to use with vaccines.

The December 2014 journal Immunological Research contained a study by the same researchers who first published on ASIA. The title was “Chronic Fatigue Syndrome and Fibromyalgia following immunization with the hepatitis B vaccine: another angle of the ‘autoimmune (auto-inflammatory) syndrome induced by adjuvants’ (ASIA).” The researchers analyzed the medical records of 19 patients with Chronic Fatigue Syndrome (CFS) and/or fibromyalgia (FM). All patients were immunized with the hepatitis B (Hep B) vaccination during the years 1990-2008 in the US. No patients had CFS or FM prior to the Hep B vaccination.

The study stated that “all patients fulfilled the ASIA criteria." This means that all individuals experienced inflammation that triggered immune injury from the vaccination and aluminum salts and then developed CFS or FM after the Hep B shots.

The onset of symptoms of CFS or FM took anywhere from days to a year after the last vaccination. Forty-two percent of the patients took the full series of Hep B shots despite experiencing adverse effects while taking the shots. Participants experienced multiple symptoms, including neurological, musculoskeletal, cognitive difficulties, memory loss, fatigue, GI, and skin problems.

Agmon-Leven, et al provided the conclusion of this study - “All patients fulfilled the ASIA criteria. This study suggests that in some cases CFS and FM can be temporally related to immunization as part of the ASIA syndrome.” The three main risk factors cited included:

1. The appearance of adverse event during immunization
2. The presence of autoimmune susceptibility (personal/family risk and history)
3. Elevated levels of autoantibodies.

The CDC recommends that all children get the Hep B vaccine at birth and complete the series by 18 months. If the child did not get the vaccination in infancy, then they recommend it as soon as possible. General adult recommendation is to get the Hep B vaccine if there is risk with sexual behaviors, drug behaviors, health care workers, dialysis, HIV, diabetics, a prisoner, etc. You weigh your risk and your infant’s or grandchildren’s risk. The findings in the study demonstrated that the adjuvants and vaccine exposure took young healthy adults, most of whom did not have known autoimmune disorders, and tipped the scales into chronic debilitating autoimmune disorders of CFS and fibromyalgia.

Earlier in the article, there was mention of an illness called macrophagic myofasciitis (MMF). This rare condition is characterized by persistent reactions of macrophages, a type of white blood cell, to the aluminum adjuvant creating either local or a systemic reaction. MMF occurs primarily in adults.

Macrophages are primarily found in connective tissue and the bloodstream and ingest foreign particles and infections like “pac-man." With MMF, the macrophage becomes dysfunctional and unable to remove the aluminum. This leads to local or systemic inflammatory response with symptoms of muscle aches and pain, tenderness, fatigue, and cognitive dysfunction. It is considered a rare systemic inflammatory disease.

Researchers published a review article on this topic in November 2014 in Frontiers in Neurology. The authors related that MMF symptoms correspond to those found in Chronic Fatigue Syndrome/Myalgic Encephalomyelitis (CFS/ME). Neurological tests show significant brain involvement with poor blood flow similar to the CFS/ME. This caused problems with carrying out tasks and function, memory, hearing beside the chronic fatigue and systemic pain.

A recent publication found in Pharmacological Research, the researchers noted a general consensus of risk factors pertaining to ASIA and felt that vaccination-related ASIA is uncommon.

Other researchers openly disagree and are trying to sound the alarm. Research published in Immunotherapy in 2014 clearly states that aluminum salts impact the brain at every single level and change gene expression. In the Journal of Toxicology, these same authors describe aluminum salts as affecting all species studied in a highly negative manner including the biophysics of water. It injures cells, circuits, and can cause catastrophic cell failure leading to death.

“Aluminum in adjuvant form carries a risk for autoimmunity, long-term brain inflammation and associated neurological complications and may thus have profound and widespread adverse health consequences.” They go onto say aluminum salts form highly toxic complexes with other elements like fluorine/fluoride and interact negatively with gyphosate (Round-Up/GMOs), lead and mercury. These are serious interactions that certainly Big Pharma, Big Ag, and Big Government will continue to dismiss and sweep under the rug.

Not everyone who gets Hep B shots or other vaccinations have such serious adverse outcomes such as MMF, CFS, or FM. But it makes one wonder how many times we are going to pour gasoline on a sleeping giant that we don’t really understand. Why turn someone’s life upside down with chronic illnesses that are poorly understood, often dismissed as psychosomatic or depressed. In the battle of vaccinations with Big Pharma and Big Government versus the groundswell movement of those opposed to vaccination, this new knowledge is groundbreaking for those with CFS and FM. It is information that needs to be fully acknowledged and understood. It may at least provide those with CFS and FM some understanding on potential reasons why they lost their health.

Hopefully, this information will help you understand risks and help prevent autoimmune disorders from occurring by taking appropriate precautions and actions. Vaccinations are nearly universal and it will take years to put all the pieces together. Remember that there are over 70 years of vaccinations given to billions of individuals, and we are still early on in understanding long term effects and all the implications that surround them. How one cleans up the damage takes arduous work. Much is left to be learned.

How to Prevent Vaccine Injury

Make sure you understand your risk with personal and family history before being lulled into the complacency that a vaccine and adjuvant is no big deal. It is a big deal to the immune system if it is already primed. A spark is a spark, but its outcome is different near a water source versus in a forest during a hot summer drought. Don’t light the match in autoimmune battles if the conditions in your body are primed. If you are stressed, worn out, digestive complaints with brain fog, brain fatigue, or suspected thyroid problems, etc., determine the risk and decide if you are going to light the match or not. The studies discussed here have focused on adults who were previously generally healthy, then received the vaccinations with the adjuvants and subsequently had their health turn into a chronic nightmare.

Work on taking the burden off the body to avoid the fire of autoimmunity. Start with the basics. Remove as many chemicals, toxins, GMOs, food intolerances, sugar, processed foods, and EMFs out of the diet and environment. Regularly work on detoxification with diet, nutrition, sweating, stretching, movement and exercise, etc. Improve gut and immune health and heal gut permeability or Leaky Gut Syndrome if present. Ensure to keep up your antioxidants stores.

When this issue is laid out on the table and the dust settles, I suspect it will be similar to what we have learned with cigarettes and cancer or HRT and cancer, but far more insidious and substantially more people. Weigh the risks. Don’t be lulled into complacency.