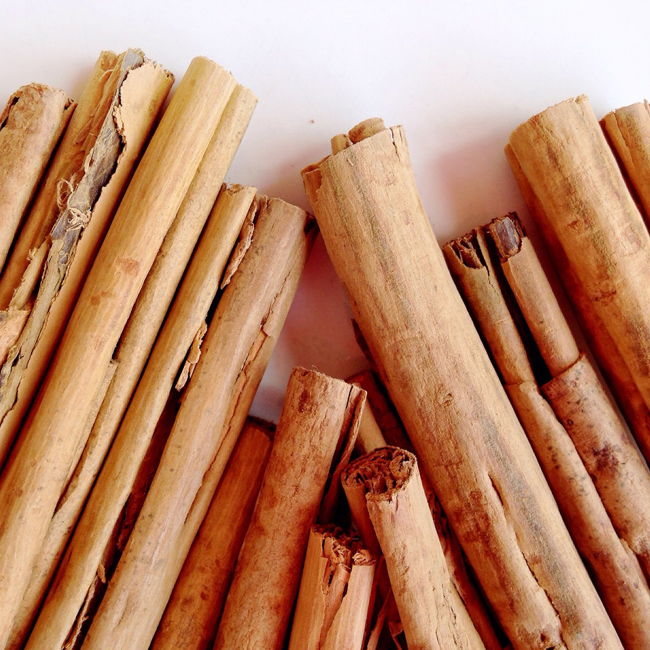 Cinnamon has a most impressive history spanning several millennia. From its ancient use by the early Egyptians in 2000 BC, to flavorful spice in cooking, and a prized health tonic, cinnamon continues to be immensely valued throughout the ages. Well-known for its support with healthy glucose metabolism, cinnamon also provides antioxidant support neutralizing free radicals and aids in a healthy, balanced immune system response amongst other benefits.

Several additional properties have been identified with this sweet, aromatic and enticing spice. Cinnamon helps your muscles burn glucose for fuel and energy production. This action in turn aids in weight management, fat burning, and heart and cholesterol health.

Cinnamon extract helps immune defense and regulatory activities, provides antioxidant protection to your brain and cells, supports cell clean-up, and helps maintain a healthy inflammatory response. It even influences dopamine and serotonin pathways that are involved with how your brain seeks and craves foods. Here are some recent research findings that demonstrate the benefits of cinnamon.

A 2017 study in the American Journal of Chinese Medicine (AJCM) reported on the Cinnamomun cassia benefits in mice fed a high-fat diet. For 16 weeks, mice received either a normal diet or a high fat diet designed to induce obesity. Groups were supplemented with either 100 or 300 mg/kg of cinnamon extract or metformin.

Another powerful and interesting finding of this AJCM study showed that the groups given the cinnamon extract were found to have activation of AMPK and make new mitochondria. AMPK is master switch at regulating cellular metabolic homeostasis and energy. When AMPK is turned on and working well, it helps cells and mitochondria burn fat and glucose while making energy. You can learn more about AMPK in the article Master Enzyme Switch Deactivated In Chronic Fatigue Syndrome and Fibromyalgia.

Immune Defense and Protection against Biofilms

Plants and trees must have their own natural defense system to ward off various microbial threats. Cinnamon comes from bark of the evergreen tree called Chinese cassia. A part of cinnamon extract’s traditional history pertains to immune defense support that translates beyond the plant kingdom.

Other findings include using cinnamon extract to help manage dental health affected by plaque build up, oral biofilms and tooth decay. Imbalances of certain bacteria lead to a production of acidic waste products in your mouth that erode at tooth enamel lending to tooth decay. These bacteria hide behind walls or biofilms lending to further dental health challenges.

Think about your dental products – toothpaste, floss, and mouthwash often have cinnamon flavoring. It’s not just to add flavor; cinnamon aids in supporting your dental health and oral microbiome.

Antioxidant Support for Your Brain

Age-related changes to brain health are affected by clearance of various metabolic compounds like tau protein, blood sugar stress, and formaldehyde. Cinnamon extract’s antioxidant and immune modulatory effects have been shown to aid in cell protection, manage cell adhesion build-up and clearance of age-related challenging compounds within your brain.

In addition to supporting dopamine and serotonin, research suggests it supports the activity of your memory neurotransmitter acetylcholine. Cinnamon extract supports oxidative stress management to glial cells, which are the neuroimmune janitorial clean-up cells in your brain.

Your stomach has a layer of mucous that lines the inside wall to provide a buffer against stomach acid and foods or beverages that are acidic to tissues. Cell studies show that compounds within cinnamon help stimulate mucous secretion in the stomach.

Cinnamon may be combined with other nutrients to enhance their antioxidant and metabolic effects. When cinnamon was combined with the adaptogen herb Rhodiola rosea, researchers found it aided blood sugar metabolism within the liver and protected against free radical damage to cholesterol. They also found the cinnamon and rhodiola combination led to higher levels of glutathione, a major antioxidant system that is greatly needed for detoxification and protection of your immune and nervous system.

Your gut flora plays an enormous role in blood sugar metabolism. Probiotics may also be used with cinnamon extract to enhance your body’s approach to blood sugar management.

When taking a cinnamon supplement, be sure to know what type of cinnamon you’re consuming. Many cinnamon extracts contain unwanted toxic compounds such as coumarin. (This is different than the prescription blood thinner Coumadin.) Coumarin and possibly other challenging compounds may build-up and stress the liver.

These problematic compounds have been completely removed from the cinnamon extract we use in Wellness Resources Cinnamon Plus. This specialized water soluble cinnamon extract (CinnulinPF®) is clinically shown to benefit blood sugar health. Cinnamon Plus also contains banaba leaf extract and green coffee berry to support glucose metabolism and weight management.

Compared to other common dietary spices like anise, ginger, licorice, mint, nutmeg, and vanilla, cinnamon provides the highest antioxidant activity due to its rich polyphenol content. It is also savored for its pleasurable flavor and aroma, but valued deeply for its wealth of health benefits. You know something is good if it has been and still is valued after thousands of years of use.