The Effects of Green Tea on Weight Management 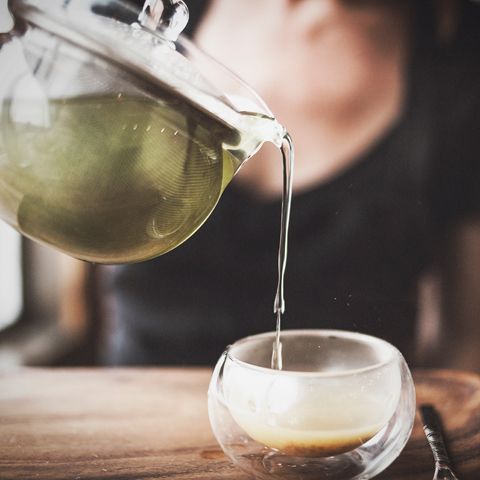 In a randomized placebo controlled trial moderately overweight adults consumed 1,900 mgs of green tea catechins per day for 90 days. The green tea also contained 400 mg of caffeine. At the end of the study the people in the green tea group lost 2.64 pounds on average, and ¾ inch from their waistline and also reduced body mass index--not bad considering that no dietary or exercise changes were part of the study.

A 12-week randomized controlled trial3 with 60 overweight adults was performed in a hospital setting with all 60 participants placed on a diet that included three meals per day. All the food was prepared for the participants. Half the group received green tea. Those in the green tea group lost significantly more weight--24 pounds--over the 12 week period. The researchers demonstrated that weight loss occurred by green tea increasing energy expenditure and fat oxidation.

Consumption of 582 mg of green tea catechins per day for 12 weeks in type 2 diabetic patients5, compared to a control group of diabetic patients, enabled a statistically significant reduction in their waistline (abdominal fat). Importantly, green tea catechins promoted a restored insulin production by the pancreas. Catechins caused a significant increase in adiponectin, the important hormone signal coming from fat that improves insulin resistance. The combination of diabetic medication and green tea produced a statistically significant reduction in hemoglobin A1C. These results indicate that even modest intake of green tea catechins improves blood sugar control in type 2 diabetic patients. When blood sugar control is being improved in conjunction with a trend of weight loss, health is being restored.

Further insights into the molecular mechanisms of green tea come from a variety of recent animal and cell studies. Studies with fat cells show that green tea catechins turn on gene signals that produce adiponectin10. Green tea has been shown to blunt the effect of insulin on baby fat cells11, helping prevent them from turning into mature fat storing fat cells. Another study shows that green tea prevents the accumulation of fat12 inside fat cells. While yet another study shows that green tea turns on genes within fat cells that dispose of calories as heat13 (a helpful way to get rid of excess). Collectively, green tea induces multiple favorable effects on white adipose tissue, which are supportive of weight loss.

Transgenic mice--mice that make no leptin--(ob/ob) experience unrelenting appetite, obesity, and fat accumulation in all the wrong places, such as the liver. In this extreme model of malfunction green tea was able to prevent fat from accumulating in the liver15. This finding is significant since fat accumulation in the human liver is a key marker that metabolic health is in big trouble.

A recent study also showed green tea helps build bone17. Green tea catechins significantly boosted the activity of bone building cells known as osteoblasts while reducing the activity of the osteoclasts that take down bone. A significant reduction of the primary inflammatory gene signal, NF-kappaB, was associated with these positive findings. Not only is this good news as yet another bone helping nutrient, but new science is also showing that positive bone health and proper metabolism are highly linked.

Green tea is one of the most widely consumed beverages in the world. Dietary supplements that concentrate the active components of green tea offer consumers a novel tool to assist multiple aspects of metabolism. Combining green tea with appropriate diet and exercise yields the best results, which is true for any dietary supplement. Green tea is synergistic with many other nutrients and is a worthy candidate for any person seeking to manage his or her weight.

Optimizing Your Nutrition for Reproductive Health

Summertime Nutritional Tips for Sun, Fun, and the Bumps that Go With Them

Cartilage and Brain Health Linked with Mitochondria and Circadian Rhythm