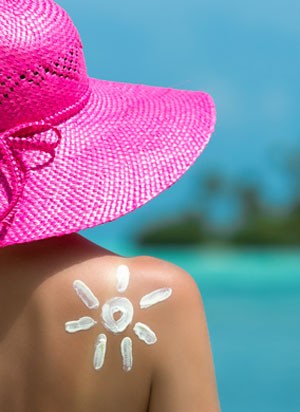 Sun protection is big business. Just walk down the aisle at the local drugstore and you can find a plethora of products to shield against the sun. We are made to believe that sun exposure is harmful and that failure to wear sunscreen is unsafe and risky. In excess, too much sun can cause blistering sunburns and aging skin. However, sun exposure is important for vitamin D synthesis throughout the body and even cellular energy.

How is it that mankind has tolerated sun exposure for thousands of years, but yet it is in only the last 10-20 years that a dramatic rise in skin cancer has occurred? Knowing how the skin maintains protection against UV radiation is fundamental to skin health. It is also important to understand how chemicals in your sunscreen may be affecting you, your children, and even the environment.

Internal Defenses in the Skin


Skin health relies on two major internal defenses. The first line of defense is melanin. Melanin is the pigment that deposits in skin and protects DNA at the skin’s surface. Skin health also relies on natural repair processes that involve multiple antioxidants.

What we do with habits like the duration or the time of day of sun exposure, clothing, and non-toxic sunscreens supports or hinders these primary defense systems.

The skin has an incredible network of antioxidant systems in its superficial and deep tissue layers. Some of the antioxidants are water soluble and others are fat soluble. The outer layer of skin, the epidermis has more antioxidants than the inner layer. Antioxidants and complex enzymatic antioxidants that are concentrated in the skin include vitamin E, glutathione, SOD, coenzyme Q10 - ubiquinol, vitamin C, lycopene, beta carotene, lutein, and zeaxanthin, and plant polyphenols like green tea extract, pomegranate, and grapeseed extract.

Researchers note that bilirubin (a liver compound), uric acid (in excess, gout), and even blood glucose within the blood stream and cell fluid provide protection to the skin as antioxidants. It has been identified that some of the most prominent antioxidants in the skin are vitamin C, glutathione, and vitamin E alpha tocopherol.

When the sun’s rays absorb into the skin, melanin protects against the radiation. If melanin is insufficient or the exposure is significant, then the antioxidant systems buffer against the exposure and cellular stress.

Scientists have shown that in skin exposed to UVB radiation, vitamin C, glutathione, SOD, and coenzyme Q10 ubiquinol are the most depleted antioxidants in the superficial and deeper layers of the skin. Here are some other key findings with antioxidants and protecting the skin.

Vitamin C is highly concentrated in the skin and is important for healthy collagen production and healthy skin.

Vitamin E is important for the thickness of the outer skin to help the skin barrier.

Coenzyme Q10 was shown in cellular studies to support healing of the skin layers.

Glutathione is considered the master antioxidant for the body and well-known for its impact on the immune system. Glutathione is essential for skin structure and detoxification. This includes the needs to detoxify chemicals absorbed into the skin like sunscreens and bug-repellants.

Plant antioxidants from green tea extract, pomegranate, and grape seed extract have been shown to help protect the skin.

Sunscreens – Are You Aware of the Dangers?

Popular sunscreen lotions and personal care products often contain parabens, BP-3 (Benzophenone or oxybenzone) and other chemicals. These chemicals are used to protect us against ultraviolet light damaging effects to the skin. While it’s easy to focus on the scent and the SPF number for level of protection, it is essential to know that these ingredients found in sun protection products pose risk and harm that is not often discussed. These findings hopefully propel you towards other safer options for you and the planet.

Some researchers and health conscious individuals question the efficacy of sunscreen use. While scientists are not ready to outright say that sunscreen use lacks benefit or is even harmful, some authors have hypothesized a link between the increased use of sunscreens and the rise of malignant melanomas and other endocrine changes and it correlates with the rise in topical sunscreens These compounds are supposed to protect against skin cancer, but do they?

Sunscreens are now considered to have significant disruptive effects to the endocrine system. Benzophenone-3 (BP-3) or oxybenzone are considered endocrine disrupting compounds. They are found in sunscreen products and personal care items, but may also be used in plastics. There are several UV filter compounds also in question like 3-benzylidene camphor (3-BC), 3-(4-methyl-benzylidene) camphor (4-MBC), 2-ethylhexyl 4-methoxy cinnamate (OMC), Homosalate (HMS), 2-ethylhexyl 4-dimethylaminobenzoate (OD-PABA) and 4-aminobenzoic acid (PABA).

Animal studies show that exposure to these sunscreen chemicals causes adverse effects with reproductive and developmental toxicity and a disturbance in the hypothalamus-pituitary-thyroid axis (HPT). HPT is the messaging system used by the brain to manage hormone output with thyroid function. Researchers found that BP-3 was found in 96 percent of urine samples in the United States and in 85 percent of breast milk samples from Swiss citizens.


Sunscreen chemicals not only affect human life, but coral reef and oceanic life are also affected by the chemicals washing off in the water from sunscreen users. This startling, but perhaps not surprising finding reflects the recent trend in human use. Sun protection products are one of the fastest growing products used globally. More than half of today’s world population lives in coastal areas. Future estimates predict that nearly 75 percent of the world’s population will live along coasts.

Recent research published in the Archives of Environmental Contamination and Toxicology has identified coral reef contamination in Hawaii and the U.S. Virgin Islands from oxybenzone and other UV-protecting chemicals. The worse contamination was found in Hawaiian sites. Oxybenzone caused toxicity to coral reefs rendering certain parts of the reef from a motile state to a deformed, non-motile state bleaching the coral reefs. The authors concluded that “oxybenzone poses as a hazard to coral reef conservation and threatens the resiliency of coral reefs to climate change.”

Other studies have also noted the increase of chemical UV filters from sunscreen applications in coastal marine waters. This is an under-studied area of concern. Researchers, though, have seen an increase in sunscreen chemicals in the water and causes an increase in the release of inorganic nutrients like nitrogen and phosphorous that fuel algae growth. Scientists and marine ecologists see this trend as a having a negative ecological consequence on the coastal marine ecosystem.


If you are not in the water with sunscreen but rather in the great outdoors and apply insect repellant together with it, be aware of recent findings. Research in animals demonstrates that when sunscreen with oxybenzone and insect repellent (DEET) are applied simultaneously, there is enhanced absorption of both chemicals. It was found that after repeated applications, DEET and oxybenozone accumulated in the blood, liver, and brain. In this study, DEET accumulated more in the liver. The authors felt that after some analysis there was no evidence of toxic nerve damage despite the demonstration that it accrued within the nerve tissue.

As a parent or for yourself, I would hope that you reconsider the simultaneous and multiple applications of this combination of chemicals. Even though this study did not reveal damaging effects, it doesn’t mean that long-term or in other real life circumstances that there isn’t an effect. It’s taken us decades to recognize the hazards of cigarette smoke and Agent Orange. Finding safer options to defending against UV radiation and skin damage is essential to all.


Coral reef structure demise in coastal waters linked to chemicals in sunscreen and the dramatic rise of malignant skin cancers in young adults in the last decade is alarming. The generation of children who commonly grew up on chicken nuggets, mac ‘n cheese, and French fries and diligent application of sunscreens appear to be in a perfect storm. Perhaps the perfect storm wasn’t so obvious in that there was a healthier diet instead, but the foods consumed had been grown with or exposed to glyphosate or Roundup, i.e. Franken Foods. This ubiquitous chemical is known to cause harm to major antioxidant systems and damage the gut microbiome depleting key antioxidant systems.

The end result in either circumstance is that vital antioxidants that were needed to protect the DNA in the skin were inadequate for long-term demands. Over time, DNA structure succumbs to the repetitive oxidative stress and becomes no longer able to suppress injured cell changes. The end result is the damage to cells outnumbers the ability to repair. As a result, cellular mutations occur which builds un-noticed by us until a recognizable tumor or skin cancer occurs. Having adequate antioxidants to remove damaged molecules before they accumulate and cause DNA damage is the key.

The fear of the sun and UV radiation has been drilled into us. We have become sun paranoid. The focus should rather be on addressing diets that are woefully lacking in the much needed antioxidants and removing endocrine disrupting compounds that tax skin antioxidants and endocrine function within the skin.

We have learned that the skin is equipped with a very sophisticated network of protective antioxidants. Learning which antioxidants are in the skin provides critical information on just how to keep the largest organ of the body healthy. Prevention is indeed vital as is quenching the free radicals after the acute exposure to halt tissue breakdown. The skin has a vast network of antioxidants that come from natural sources.