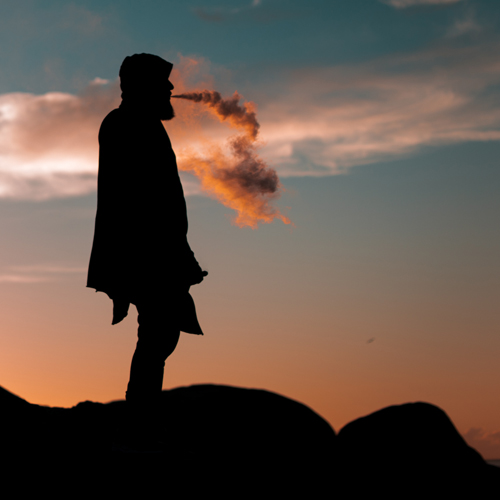 Have you caught the news lately that has featured dramatic stories about young adults becoming acutely ill with respiratory failure after vaping or using e-cigarettes? Public television commercials and school districts alike are trying to raise awareness about e-cigarettes and vaping concerns. E-cigarette use has dramatically increased in a short time and has caused alarm with the CDC, health professionals, schools and parents. In just a few years since the product entered the market, it is now estimated that one in five young adults uses e-cigs. Numerous studies provide strong evidence that e-cigs and vaping “is not just harmless water vapor.”

Electronic cigarettes may be known as e-cigarettes, e-cigs, vapes, electronic nicotine delivery systems (ENDS), vape pens, and e-hookahs. The product comes in many shapes and sizes and may look like a regular cigarette, pipe or cigar or may look like a USB flash drive or pen. The most popular brand on the market today is JUUL.

E-cigs have been around since 2006, but the JUUL “pod-mod” e-cigarettes were introduced in 2015. The products are marketed as an alternative and less addictive form to traditional burning cigarettes and tobacco products. However, marketing and enticement of e-cigs has resulted in a different outcome. Rather than helping cessation from traditional tobacco use, those who start e-cigarettes and vaping often become dual users and have a three-fold increase risk of future tobacco smoking.

Current e-cigs on the market deliver as much as four times more nicotine than earlier devices but contain less than a regular cigarette. All JUUL e-cigs have nicotine. A single JUUL pod of e-cig liquid contains as much nicotine as a package 20 regular cigarettes. Some brands supply flavored e-juice without nicotine that are considered “safer”. As you will find though, e-cigs don’t need nicotine to be toxic.

Tricks and Treats from Manufactured Chemicals

The trend for using these products has dramatically increased in the last few years. In 2018, almost 21 percent of all youth were using e-cigs. In addition to the “less nicotine alternative”, e-cig users prefer them because of flavors, the ability to do vaping tricks and competitive activity, social media influence, boredom reduction, stress, mood, and appetite reduction and because it is more interesting than a regular cigarette.

Over 8000 powerful flavoring agents are used in e-cigs such as watermelon, green apple, cucumber, and bubble gum. These flavoring agents are used to mask the taste of nicotine while providing a burst of sweet and cool sensations simultaneously. Inhaling these chemicals causes a large burst of neurochemicals in the reward-pleasure centers of the brain making the product highly appealing and addictive to new users. In young adults, the brain has not reached full maturity and lacks the full ability to make good judgment calls until about age 25. Habits established prior to age 25 can often last a lifetime.

Inhalation of Heavy Metals and Carcinogens

E-cigs contain metal coils which electronically heat up and aerosolize the liquid flavoring and nicotine as opposed to the combustion and burning of traditional tobacco products. The e-cig coils contain heavy metals and may consist of chromium, copper, manganese, nickel, lead, silver, tin and zinc. As the e-cig heats up, these particles can erode and be inhaled into the lungs along with the other chemicals present in the flavorings.

Chemicals used in the e-juice include alcohol, flavoring agents, nicotine, and acrolein which is a known carcinogen and propylene glycol. Flavoring agents contain several different aldehyde and formaldehyde agents and diacetyl. Diacetyl is used in microwave popcorn and is known to cause bronchial inflammation with prolonged exposure.

The combination of heat and chemicals affect the intensity and size of the particles inhaled that reaches the lungs, which causes oxidative stress and cellular injury within the lungs and other tissues. Individuals with asthma and COPD or other lung disorders are more likely to experience more harm than those without respiratory illness.

Multiple risks and adverse effects caused by e-cigs and vaping have been identified. The list of concerns is shocking and revealing as to just how harmful these products are. Here are some of the findings.

An August 2019 review study showed evidence of damage to cells with e-cig use linked to chronic lung disease and cardiovascular disease in cellular and animal studies. E-cig products were not found helpful in smoking cessation.

Recent case reports describe adolescents who develop respiratory failure after vaping. The chemicals inhaled cause inflammation in the lungs and lead to non-infectious types of pneumonias.

Adolescent asthma sufferers can experience marked worsening of their asthma symptom to the point of status asthmaticus – which is life threatening.

Vaping with nicotine e-cig products caused blood pressure and heart rate to elevate for up to 45 minutes which was higher than those smoking a cigarette. Arterial stiffness also increased which suggest significant cardiovascular disease risks.

Research published April 2019 cites that vaping induces oxidative stress injury to the inner lining of blood vessels, i.e. vascular endothelial dysfunction. A snowball effect occurs as a result of the free radical stress and inflammation to blood vessels that leads to glucose intolerance, a higher risk of developing type 2 diabetes, damage to the blood-brain barrier (BBB) and a higher risk of stroke. The effects are similar to what tobacco smoke exposure causes.

The flavoring agents without nicotine also altered neurotransmitter levels in the brain. A study published July 2019 demonstrated that the chemical flavoring – farnesol used in green apple and other fruit flavored e-cigs caused mice to seek out the product. Farnesol adversely altered acetylcholine, dopamine, and GABA levels in the brain which made the product attractive or caused a craving response.

Brand new research published September 2019 showed that e-cig users are at high risk for losing the normal tear production in the eyes and suffer from dry eyes. The chemicals released in the vapor affect the mucosal lining in the eyes.

Periodontal disease is much higher in those who use e-cigs just like tobacco users. Users were also more likely to experience cavities, toothaches, and dental damage.

In the October 2019, Journal Current Opinion of Pediatrics, authors from Drexel University College of Medicine on the increasing trend of all types of e-cig use stated that “If adolescent smoking trends continue at the current rate in the United States, 5.6 million of today’s American youth under the age of 18 will die early from a smoking-related illness.”

It’s not just the user of e-cigs that may be harmed by the nicotine and vapors, by-standers exposed to e-cig and vaping second-hand smoke is a real concern too. Early studies indicate that if you are near the area with e-cigs in use with limited ventilation, you are being exposed to a variety of volatile organic compounds (VOCs), flavorings, aldehydes, etc. that are in the e-cig emissions.

Researchers from The Netherlands found numerous chemicals in the exhaled breath from e-cigs smokers. Their toxic breath contained increased levels of nicotine, propylene glycol, tobacco-specific nitrosamines (TSNAs), and heavy metals (copper). TSNAs have been linked with an increased risk of tumors.

JAMA Network Open recently reported that at least one out of every three students in 2018 experienced second-hand smoke exposure from e-cigarettes. This is an increase from one in four students as reported in 2015-2017.

CNN Headline News reports from September 5, 2019 pointed fingers at vitamin E acetate present in cannabis-containing E-cigs as the cause for severe lung injury in recent e-cig vaping injuries. Health officials interviewed quickly pointed out that they don’t exactly know which chemical was causing the severe pulmonary illness in those using cannabis containing E-cigs and that vitamin E was not the culprit. Vitamin E is still safe as nutritional supplement in oral form.

Over the years, occupational exposures to coal dust, iron mining, asbestos, diacetyl and so forth have left a trail of harm that has taken years or decades to see the adverse effects. Nicotine and tobacco products, huffing or inhalant abuse has left its own path of destruction. It appears that the e-cig industry has created a dangerous product that is sweeping across the nation in popularity at alarming rates. In some cases of use, damage occurs rapidly as opposed to decades in the examples above.

The best way to help yourself or your young adult is to not start in the first place. The Centers for Disease Control warning states that “E-cigarettes are not safe for youth, young adults, pregnant women, or adults who do not currently use tobacco products.”

Many of the reasons cited for using the e-cigs reflect a tendency or need for more nutrition to the brain as it relates to dopamine, acetylcholine, and GABA support. As mentioned in the last week’s article, Back to School Stress and Nutrition, an individual who is better nutritionally fortified can navigate through stress, mood, social and cognitive challenges much easier than someone lacking good nutrition.

Consider nutritional support such as N-acetyl-l-tyrosine, alpha GPC, acetyl-l-carnitine, pantethine, choline, and B vitamins to aid dopamine and acetylcholine support. L-theanine may also be helpful to aid dopamine and GABA production. Music can also support dopamine levels depending on the type and your preference.

If you have first- or second-hand exposure to the devices, strongly consider support such as N-acetyl-cysteine (NAC), milk thistle, dandelion root extract, and r-alpha lipoic acid to support daily detoxification.

Nutrition that aids healthy lung structure and function may include astaxanthin, NAC, vitamins A and D, magnesium, grape seed extract, curcumin, resveratrol, quercetin, B vitamins, coenzyme Q10, and even probiotics.

Support to aid a healthy blood brain barrier may include curcumin, omega-3 DHA, fisetin, r-alpha lipoic acid, magnesium, vitamin E as tocotrienols and others. Many of these same nutrients quench free radicals that affect the inner lining of blood vessels sensitive to oxidative stress.

E-cigs are not just water vapor and a simple natural flavor being inhaled. Information negates that claim. Young adults filled with energy and their whole lives ahead of them often think they are invincible and yet are sometimes the most vulnerable to addictive risks. It is up to us to teach them to make good choices.