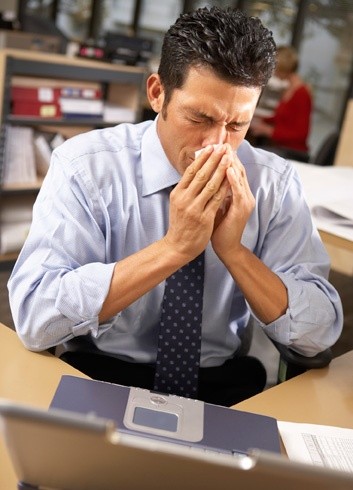 Sinus pressure, pain, drainage, and feeling like your head weighs a ton reflect sinus problems. Sinus concerns may last just a few days with a simple cold, or maybe a few weeks during allergy season, but many suffer with chronic sinus difficulties for months or longer. Chronic sinusitis affects about ten percent of the adult population. Many individuals still suffer despite treatment with multiple rounds of antibiotics, steroids, and even multiple sinus surgeries.

In healthy sinuses, the mucosal layer is one millimeter thick. In chronic sinusitis, the mucosal layer thickness may increase an amazing 10-15 times, causing symptoms of enormous pain and pressure. Studies using specialized CT scans can now see that periodontal disease causes thickening and swelling of the maxillary sinus mucosa. The presence of sinus mucosal swelling is three times more likely to occur with periodontal disease. Failure to identify dental distress and the link with chronic sinusitis can lead to unresolved sinus concerns and even affect heart health and diabetes.

Chronic sinusitis is in large part due to fungal or yeast overgrowth rather than bacterial overgrowth. The July 2017 journal Lancet Infectious Disease published a study on the topic of fungal problems with chronic sinus and other respiratory diseases.  Indoor mold or fungal exposure is seen as a major concern that causes or worsens allergic inflammation within the sinuses and respiratory tract even in healthy, non-immunocompromised adults. The Lancet article recommended that anti-fungal treatment should be used in almost all patients with chronic sinusitis and other chronic upper respiratory infections.

Other studies have found that nearly 50 percent or more of chronic sinusitis problems are due to fungal overgrowth. Mold allergies and mold toxins create chronic sinus problems, but their toxic effects often go far beyond that. The two most common causes for chronic fungal infections affecting humans are Candida yeasts and Aspergillus molds.

Antibiotics and Antifungals Are Ineffective Against Chronic Fungal Sinusitis

Treatment with nasal or systemic steroids and antibiotics is ineffective for chronic sinusitis due to fungal overgrowth. Ten years ago, the Journal of the American Medical Association reported that antibiotic treatment failed to help most sinusitis concerns. Antibiotic treatment is still recommended though by practitioners if they feel that a bacterial sinus infection cannot be ruled out.

Ask your provider to do a culture rather than guess. If your provider has recommended anti-fungal treatment, be aware that just like with antibiotic resistance and loss of effectiveness, the same thing is happening with antifungal drugs and fungal infections. Medicine is experiencing increased antifungal drug treatment resistance for serious Candida infections. Those who are hospitalized and immunocompromised are at the highest risk for multi-drug resistant Candida.

Chronic sinusitis and gut concerns are also connected. Candida or other fungal infections in the sinuses may be associated with gut disorders like irritable bowel syndrome, leaky gut syndrome and inflammatory bowel disease. In addition, GERD or gastroesophageal reflux disease has been implicated as a cause for chronic sinusitis. Epithelial barrier disruption in the sinus, respiratory tract, and gut from inflammation appears to be the link for the interconnection. Scientists don’t know exactly why yet, but I suspect the disruption is likely due to similar changes seen with leaky gut syndrome.

Food allergies cause chronic sinusitis and chronic nasal polyps. Of the food allergies tested, dairy is considered the most problematic food. Other foods tested and found commonly problematic include egg whites, wheat, potato, and tomatoes. These foods were linked to medically resistant chronic sinusitis that occurred with or without nasal polyps. IgE testing was used to determine allergic reactivity. Delayed food allergy testing or ELISA IgG testing may bring about further findings.

IgG reactions or delayed food allergies can occur 3 hours to three weeks after exposure to the food trigger. Each person is different when it comes to food tolerance. Food allergy and intolerance testing may just save you from the perils of unresolved chronic sinusitis. Adenoid enlargement and ear infections in children and adults may correlate with chronic sinusitis. These too can be linked with food allergies.

Chronic sinusitis, fungal infections, and food allergies are associated with TH2 dominance or insufficient TH1. TH2 dominance refers to how various groups of white blood cells in the immune system function and if they are dominant or insufficient. One white blood cell group is lymphocytes. Lymphocytes are comprised of T cells and B cells which have their special function. A simplistic view is that T cells are TH1 and B cells are TH2. TH1 and TH2 are kept in balance when the immune system is healthy and behave much like a teeter-totter. However, the balance can be disrupted and TH1 dominance or TH2 dominance can occur with different immune disorders. This information helps point one in a direction of optimal recovery.

The primary takeaway from this article is that chronic sinusitis means that something more is going on in the body. It is not a deficiency of antibiotics. Nasal polyps which occur as a result of tissue irritation and inflammation don’t just appear. There is a reason. Repeat “roto-rooter” sinus surgeries are not the answer in these cases. Chronic sinus problems identify that one or more concerns exist with dental health, gut health, fungal infections, food allergies, and immune imbalances. Natural plant nutrients provide safe, natural support for the immune system.  You can help energize and restore your immune system!