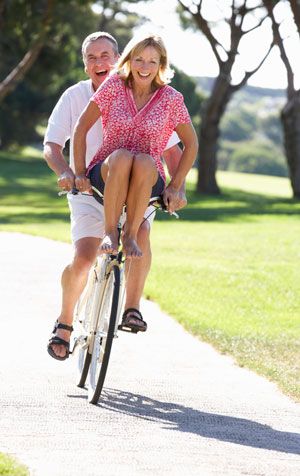 There are an estimated one to three million Americans and millions more around the world, who struggle with POTS (Postural Orthostatic Tachycardia Syndrome). POTS affects the autonomic nervous system, heart and blood pressure, with rapid heart rate, dizziness, and several other symptoms upon standing. It can lead to mild problems or can be severely disabling. Several autoimmune disorders, including Chronic Fatigue Syndrome and MS are known to cause or be associated with POTS. The recent information may help many of these individuals better manage this often disabling disorder.

The main feature of POTS is a form of orthostatic intolerance, wherein symptoms occur upon standing and are often relieved by lying down. There may be symptoms of tachycardia or elevated heart rate upon standing with other symptoms of palpitations, fatigue, exercise intolerance, light headedness, nausea, trouble concentrating, near fainting, and feelings of trembling. Depending on the subset of POTS, blood pressure may drop, remain normal, or elevate in response to standing. There may be difficulties or disturbances in sweating, temperature regulation and even bowel and bladder function (motility, irritation, etc). It may make individuals unable to exercise because the activity brings on fainting spells or dizziness.

Anyone at any age can develop POTS, but the majority of individuals affected (between 75 and 80 percent) are women between the ages of 15 to 50 years of age. Some women report an increase in episodes of POTS right before their menstrual periods. POTS often begins after a pregnancy, major surgery, trauma, or a viral illness. Daily life activities are often a struggle for many of these individuals. The amount of functional impairment can be similar to that of persons struggling with congestive heart failure or COPD. Often these individuals are dismissed or misdiagnosed with anxiety or panic disorder as the diagnosis is easily missed. The gold standard in diagnosis is a tilt table test to observe heart rate, skin changes, blood pressure, and blood levels of various neurotransmitter levels.

A recent study in Journal of the American Heart Association found that patients with POTS had elevated antibodies to adrenergic receptors. This isn’t completely new information as previous findings identified problems with receptors sites and imbalanced norepinephrine. The new discoveries, however, show that it is an autoimmune attack on the receptor sites. Adrenergic receptors are receptors sites for catecholamines (norepinephrine and epinephrine) that are involved with the tone and regulation of the sympathetic autonomic nervous system. This antibody activity is thought to change the receptor site function that mediates the actions of adrenaline type compounds. This change leads to a build-up of norepinephrine in the blood stream and results in tachycardia and other symptoms of POTS. They did not identify the specific trigger, but as we know with autoimmune concerns, often there are numerous possibilities. These findings provide strong evidence that POTS is by itself an autoimmune disorder.

Further information released June 2015 showed other autoimmune markers and disorders in patients with POTS. Just like the Mayo Clinic study, they found that Hashimoto’s autoimmune thyroid disorder was the most prevalent. This was followed by rheumatoid arthritis, and SLE (systemic lupus erythematosus). Ninety percent of the patients with POTS in this study were female. In this patient population, 25 percent had positive ANA antibodies, 7 percent had positive anti-phospholipid antibody (aPL antibody) and 20 percent had some other current autoimmune disorder.


As we saw earlier, there are many autoimmune disorders that are associated with POTS, including patients with Chronic Fatigue Syndrome/Mylagic Encephalomyelitis (CFS/ME). Interestingly, back in 2003, researchers identified that certain groups of patients with CFS/ME had autoimmune antibodies to a specific type of cholinergic receptors, CHRM1. The study identified only this aspect and did not look further into treatment options. In this particular study, the patients who had the auto-antibodies to the CHRM1 choline receptors had symptoms of muscle weakness, forgetfulness, and difficulty thinking. If you take this finding and think about these CFS/ME symptoms in context of choline, it is striking that these symptoms are often seen with choline deficiency within the brain and seen much later in life with various dementias including Alzheimer’s. This makes me wonder, is there a correlation with poor choline function earlier in life with CFS/ME affecting methylation, mitochondria, oxygenation, and brain inflammation that causes perhaps similar symptoms to later life issues of Alzheimer’s?


The expanded findings of autoimmune antibodies present with POTS and that POTS is often found in other neuro-immune disorders opens the door for exploration, understanding, and new options of support. The additional discovery that choline defects and deficits lead to loss of cell membrane integrity, mitochondrial dysfunction, and impaired oxygen use are an exciting find that may help patients with POTS and CFS/ME, MS and many other autoimmune sufferers with POTS. It should also raise questions for those with other concerns related to choline insufficiency with family history of Alzheimer’s disease. Others may have problems with non-alcoholic fatty liver disease, (NAFLD) methylation defects, elevated homocysteine levels, or problems with PEMT enzyme and gene as seen with your commercial genetic profile, may need much higher intake of choline in your diet or as a supplement. This may especially be the case if you have been of the mindset that eggs, especially egg yolks are bad for heart health.

Given the decades long fear of egg yolks as being bad for you or the Standard American Diet, it is not surprising to see choline deficiency present in the population. Beef liver and egg yolks have some of the highest amounts of choline in foods. Other foods that contain choline in lesser amounts include cod, chicken breast, wheat germ, cauliflower, broccoli, amaranth, spinach, quinoa and others. Incorporating these foods into your diet on a regular basis can help support fundamental needs, but if you have one of these concerns, then consider supplementation for additional fortification. This powerful essential nutrient just might help turn your life around and improve your tolerance for gravity and being upright!