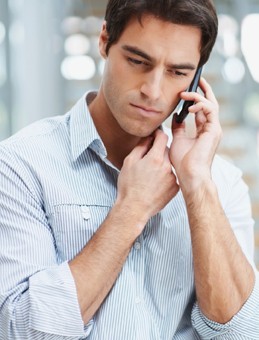 The cell phone and the internet have permanently transformed technology and life as we know it. It is common place to have your phone in your pocket, purse or within a few inches to grab the latest text or message, check social media, or search the web. We think nothing of having this device held up to our face, in a front shirt pocket, or in hip pocket. While this device is on, it constantly emits radio frequency radiation or cell phone radiation that impacts the body when in close vicinity.

This constant, daily exposure has concerns and affects virtually everyone. Nearly ninety-five percent of American adults use cell phones according to a 2016 survey by the Pew Research Center. Ubiquitous use, acceptance and access to the benefits of technology have overshadowed a long-standing question. Is the radiation emitted by cell phones harmful to the body? Scientists across the globe continue to pour large amounts of time, money and research into this question to find answers. Recent conclusions show credible evidence of cell phone radiation linked to significant health risk with various cancers.

The research was completed in a series of stages, with the first results published May 2016 and the final results just released February 2018. The information was then given to a Peer Review Meeting and expert panel, who reviewed the information in an extensive review meeting at the end of March 2018. These experts concluded that the federal studies show clear evidence of carcinogenicity or cancer caused in animals exposed to cell phone and wireless radiation.

1. Cell phone radiation exposure led to an increase in certain types of tumors in the brain (gliomas) and the heart (schwannomas).

2. There was an increase in tumors found in the adrenals, prostate, pancreas, pituitary, and liver.

3. There was an increase in glial cell hyperplasia of the brain, which is a precursor or precancerous state to the type of brain cancer – malignant glioma.

4. Damage to DNA was found in both rats and mice involved in the study. DNA damage to the hippocampus (memory center) of the brain was identified in the male animals.

5. There were heart changes or cardiomyopathy identified in male rats.

7. Female animals had an increased incidence of benign brain tumors.

8. Male animals had an increased incidence of benign heart, brain, and prostate tumors.

Dr Lennart Hardell, Oncologist, from Sweden wrote, “the results showing an increase in schwannomas and gliomas are of increased concern as it corroborates carefully done epidemiological studies on cell phone use and brain cancer which revealed an increase of similar brain tumors in humans with long term use of cell phones on the ipsilateral (same) side of the head. In the final NTP study researchers also found an increase in malignant lymphomas of all exposed groups compared to controls. Dr. Hardell also notes an increase in thyroid cancers worldwide as well and discussing why the location of cell antennas on phones could account for this increase.”

When he looked at the lowest exposure group (1.5W/kg) he found “6.7%, or 12 of 180 male rats, developed heart or brain cancer or pre-cancerous cells. Whereas, in the highest exposure group (6 W/kg), fully 13.3%, or 24 of 180 male rats, developed cancer or pre-cancerous cells as compared to 0% in the 90 unexposed male rats.” Dr. Moskowitz concludes “The NTP and the other animal studies are the missing links. These studies prove that long-term exposure to low intensity, non-thermal levels of microwave radiation can cause DNA damage and cancer in an animal model. To date, many hundreds of studies have found increased oxidative stress (including stress proteins, free radicals and DNA damage) from exposure to low intensity microwave radiation.”

“He also notes that many scientists are calling for a reclassification of radiofrequency radiation asking that this be upgraded from a Group 2B possible carcinogen to a 2A Probable Carcinogen or a Group 1 Known Carcinogen.”

Today’s news is filled with daily reports of concerns and threats associated with guns and violence, chemical and nuclear weapons, but little attention to this topic. Yet cancer rates are startling and its effect on families are seen too commonly with fundraising websites and community benefits for patients and their families with rare cancers. The American Cancer Society 2018 statistics show that in the course of one’s lifetime, there is a 1 in 3 chance of cancer. Just a few decades ago, statistics showed that it was 1 in 10,000. Think about those statistics. It should grab your attention and be a wake-up call.

Certainly, more research is needed to better understand technology’s effect on the body, but where is current education to protect against these potential risks and concerns? How about public and media outcry for understanding risks and protection against ubiquitous exposure to wi-fi? How many families will have to spend months or years in the hospital to care for a sick child or parent with cancer before we turn this tide around?

Some media headlines and even the National Toxicology Program website on cell phone information down played the results as inconclusive, but the panel experts said otherwise. It has taken decades for smoking and asbestos exposure to go from common usage to years later being banned or restricted followed by class-action lawsuits for bodily harm or death caused by these substances.

There is no doubt that the quest will continue to have wireless access across the globe. We as consumers can also have our own personal quest to protect ourselves and loved ones from this inescapable technology and seemingly innocuous challenge. We can have our own butterfly or ripple in the pond effect by taking proactive steps and teaching others to do the same. Experts recommend reducing and maintaining a distance from the device, especially with children. Do not sleep with your phone near your head. Use wired headsets and keep the phone away from your body. Unplug wireless routers at night or use other wired technology. Consider EMF shield clothing, bedding and devices.