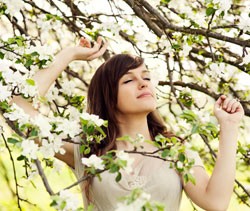 Quercetin is a common flavonoid found in many fresh fruits and vegetables. It has been in widespread use in the dietary supplement industry for the past two decades due to its natural antihistamine properties. Research is dramatically expanding our understanding of this nutrient, including its nervous system support, immune support, and weight management properties.

Quercetin possesses unique antioxidant activity. A study in October 2009 demonstrated how quercetin activates the key step leading to the production of cellular glutathione1 (a cell's primary antioxidant). The researchers showed how this mechanism protected the insulin producing beta cells of the pancreas, contributing to healthier blood sugar function. A January 2009 study showed that quercetin offered significant antioxidant protection for cells lining the sinuses3. And a March 2009 study shows that quercetin offers significant antioxidant protection to the mitochondria4 (cellular engines).

Quercetin's antioxidant effects also extend to the cardiovascular system5.  A mouse study showed that quercetin increased the friendly form of nitric oxide8 in the circulation, in this case supporting male erection.

Researchers demonstrated that quercetin modulates the key anti-inflammatory gene signal known as NF-kappaB. For example, quercetin was shown to lower NF-kappa B in bone10.


The original interest in quercetin as a dietary supplement ingredient was based on its ability to stabilize mast cells, which release histamine and other inflammatory signals. It became a popular and widely used remedy for sinus congestion, sneezing, the pollen season, and other issues where the immune system seemed to behave in an excessive direction.

Quercetin's antihistamine properties are now well established. It has been found to stabilize mast cells13 in a way that helps lower stress induced anxiety and allergic reactions. A chain of recent discoveries helps place the significance of these discoveries into context, with far ranging implications for human health and improved nerve tolerance for managing stress.

One study shows that stress14 itself is adequate to begin the migration of immune cells toward your skin, as if preparing to deal with a wound or infection – clearly an evolutionary strategy where stress typically implied injury of some type. Another study shows that stress turns up the volume on mast cells15, priming them to release inflammatory chemicals that are typically involved with allergies, asthma, skin conditions, and digestive problems. Furthermore, the communication coming from mast cells feeds back to nerves and modulates behavior through a sense of anxiety. Mice bred with no mast cells have no fear, and thus boldly venture out and are easy prey.

Quercetin has shown that it can reduce the effects of stress16 in nerves while preventing depletion of nerve antioxidants due to stress. Researchers concluded that the “results suggest that neuroprotective properties of quercetin can be used in the treatment and management of stress and related disorders.”

Quercetin not only prevents mast cells from inappropriately releasing irritant chemicals18 like histamine, but it also reduces the inflammatory19 immune system signals like IL-6 that come from mast cells and are known to talk to nerve cells (glial cells).

In 2010 the journal Nature Medicine published three groundbreaking articles linking the function of immune cells to weight gain – data that opens the door to solve all kinds of health problems.

It has been known for years that the extra pounds of fat in an overweight person generate significant amounts of immune-related inflammatory signals such as TNFa and IL6. Such inflammation not only damages the stored fat so that it is less metabolically responsive, but it has also been shown to induce inflammatory damage around the body.

What hasn't been understood are the changes within stored fat that result in this inflammatory state. The research goes a long way toward explaining exactly how this happens, and the mechanism is startling. It involves the function of various T regulator cells of the immune system -- cells that until this point were never thought to have anything to do with metabolism and body weight.

These studies show that in animals that are not overweight there is a high level of T Helper cells (CD4*) and regulatory T cells in their white adipose tissue. However, in the fat of overweight animals and obese diabetic humans this population of immune cells is virtually gone and has been replaced with a population of CD8+ T cells (also called cytotoxic T cells or T killer cells), cytotoxic T cells kill cancerous cells and virally infected cells. Here they are in excess amounts within stored fat – apparently responding to initial stress within white adipose tissue from too much extra fat.

It was shown that these cytotoxic T cells were behind the recruitment of excessive macrophages into the extra pounds of fat. The macrophages, in turn, generate the massive inflammation associated with being overweight or obese. This problem, in turn, results in even more cyctoxic T cells, and we end up with one large inflammatory party that self-perpetuates as well as damages the metabolism of calories in white adipose tissue (locking in excess pounds of stagnant fat that won't budge).

This means that the proper T helper cells and regulatory T cells are needed to keep white adipose tissue in a noninflammatory condition. The researchers also showed that when this slides out of balance then glucose uptake by fat cells is dysregulated, leading to perpetuation of obesity. This is a nasty catch-22 that most certainly applies to any person who has trouble losing weight by eating and exercising.

The researchers showed that as part of this immune cell problem, there were excessive numbers of T Helper 1 cells and a lack of T Helper 2 cells within the fat. Excess T Helper 1 cells are associated with autoimmune problems, allergy, skin problems, etc. It is quite likely that just as excess inflammation coming from fat cells can wreak havoc around the body, so it is that fat may be tilting overall immunity into T Helper 1 excess, leading to multiple health problems. Or a T Helper 1 health problem may in reverse help set the stage for obesity. Either way it is not a good situation.


In addition to the new discovery of excessive mast cell activity and poor metabolism, quercetin demonstrates a variety of other ways in which it helps metabolism and weight management.

One of the great problems in becoming overweight is that your fat cells expand in size and multiply in number. There appears to be no shortage of baby fat cells willing to mature into fat storing goliaths. Quercetin has been found to block baby fat cells31 from maturing as well as induce cell death (appropriately) in the baby fat cell population. Tests showed that quercetin had a 71 percent inhibitory rate on new fat cell formation, far higher than any other flavonoid. Another study using quercetin and resveratrol32 showed similar findings, suppression of fat cell formation and enhanced fat cell death.

Furthermore, quercetin has been shown to be absorbed into fat cells where it induces significant antioxidant activity33. This will lower inflammation coming from fat cells, such as the problematic excess of TNFa typically experienced by overweight individuals. A metabolic study with quercetin showed that it lowered all inflammatory markers34 tested, offsetting the stress of a high fat diet.

Another problem in overweight individuals is that glucose is too easily taken up by fat cells after a meal, which in turn stimulates excessive leptin production by fat cells and locks in leptin and insulin resistance. It has been demonstrated that quercetin directly blunts37 this inappropriate uptake of glucose by fat cells.

The proper function of leptin and adiponectin within fat is vital for healthy metabolism. When these hormones work properly they turn on a pivotal enzyme called AMP-activated protein kinase (AMPK). In turn, AMPK activates numerous metabolic signals that facilitate healthy metabolism and longevity39. One way to activate AMPK is to exercise.

Quercetin helps reduce inflammation that occurs within fat. It helps reduce the number of fat cells and prevent the development of new fat cells-- both key issues in the battle of the bulge. It also boosts adiponectin levels that support healthy blood sugar metabolism. It activates the AMPK enzyme system that facilitates healthy fat burning. And its supreme ability to stabilize mast cells indicates that it is likely to change the function of immune cells that operate within fat in a way that is conducive to having an easier time with weight management efforts.