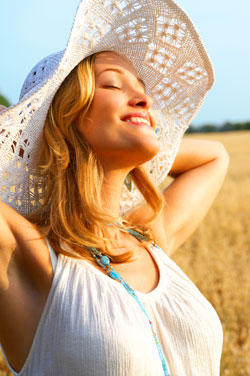 Scientists at the U.S. Centers for Disease Control and Prevention1 have found perchlorate in the various brands of powdered baby formula that they tested. Perchlorate is a thyroid toxin, and feeding it to babies is a really bad idea. Unfortunately, the breast milk of women across the country has also been found to be contaminated with perchlorate. Perchlorate in breast milk has also been found to displace iodine - leading to potential serious thyroid problems for infants.

Perchlorate poisoning of America is a gift of the military discharging old rocket munitions into rivers and lakes which have polluted water in California, Texas, and Florida (see a list of 36 states and the areas of known perchlorate discharging by the military). The Colorado river was heavily contaminated and thus large regions of California have been affected. The toxin hangs around in ground water indefinitely. The problem is that a great majority of food comes from these regions. Dairy products and lettuce from these regions are especially problematic – even if organic.

I fully reported on this scandal back in 2006, in Fight for Your Health: Exposing the FDA’s Betrayal of America, Chapter 13 – How the Military has Poisoned our Water. The Bush administration fired or forced out virtually every main scientist at the EPA that was trying to fix this problem – and then played the national security card to prevent the military from spending the needed 50 billion dollars to clean up their pollution.

Perchlorate is a powerful thyroid toxin, as it binds to the thyroid gland more than iodine. The current levels in food in America are especially problematic to babies and infants, partly because the exposure is much higher for them based on fluid intake and body weight and partly because thyroid function is vital for the ability to thrive, brain development, intelligence, and optimal body weight and growth. Ensuring you and your infant are iodine adequate is likely to help offset the adverse influence of perchlorate.