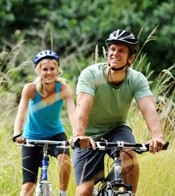 Dots are being connected in the complex health puzzle – discoveries worth understanding. Leptin is the hormone that comes from your fat, travels to your brain, and controls your energy and metabolism. I've written about it extensively in my books and on this website.

Adiponectin is leptin's companion, also coming from stored fat. When you eat too much and snack too often your leptin levels go too high (leptin resistance), at which point adiponectin levels are suppressed. Once this happens disease is much more likely. For example, the drop in adiponectin is directly related to the onset of insulin resistance1 and eventually diabetes.

New research now shows that the drop in adiponectin2 is also associated with an inflammatory-driven decline in kidney function, causing protein to leak into the urine (albuminuria). This leaky protein problem is a sign of impending kidney and cardiovascular disease (high blood pressure) and is often seen in the declining health of those who are overweight. Adiponectin helps your kidneys by turning on key energy pathways in kidney cells (AMP kinase enzymes) so they have the power to do their normal filtering work. Without the adiponectin stimulus the kidney cells are overloaded by too much work – resulting in proteins spilling into the urine.