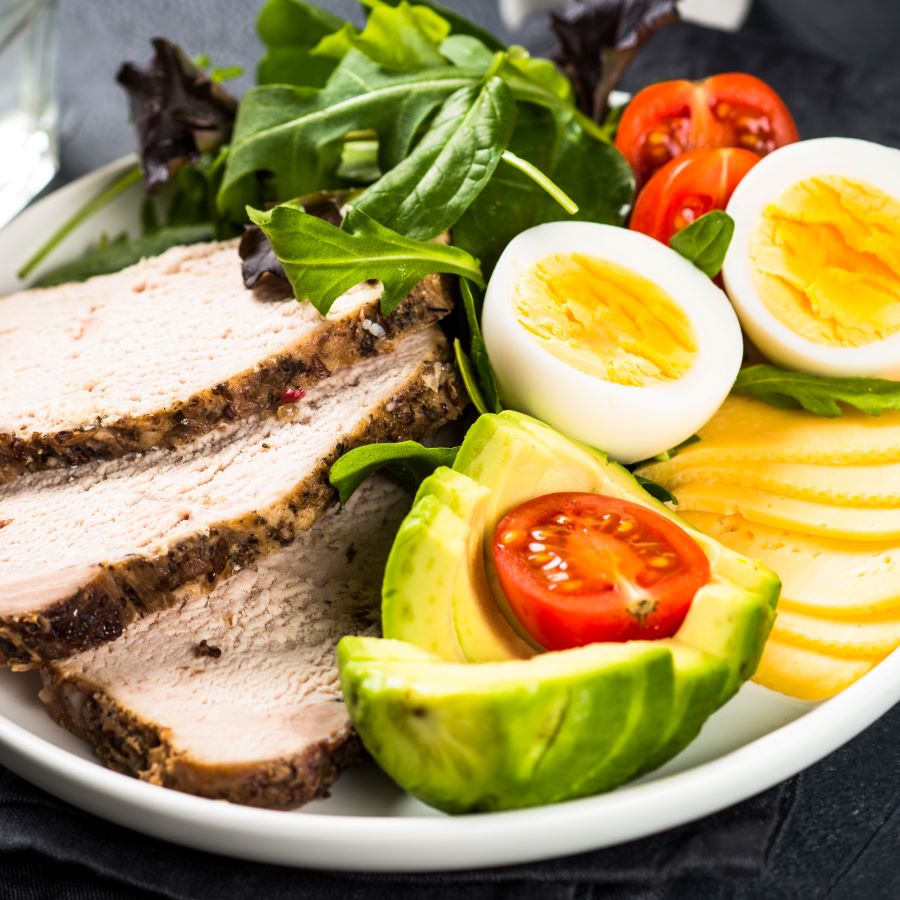 Within the last several years, the “keto diet” has been advertised and praised for its ability to help weight loss, improve metabolism, enhance athletic performance, reverse neurological distress, and much more. It continues to be highly popular for the layperson and of great interest as well as controversy for researchers. If you follow a keto diet, here are some recent studies and thoughts for you to be aware of.

The Western diet is filled with high fat, high refined carbohydrate intake with low nutrient intake. To offset obesity and other degenerative effects of the Western diet, many have turned to the “keto diet” to reverse poor health. As you walk down the grocery store aisle, products advertise “keto-friendly” making it look enticing and easy to follow. Or is it?

The keto diet or ketogenic diet is focused high fat, low protein, and low carbohydrate foods. Carbohydrate intake is limited to 50 grams or less per day. The goal is to put your body into ketosis by burning fat or ketones for fuel rather than glucose or blood sugar. There are a few different diet variations.

The classical ketogenic diet developed in the 1920’s consists of a 4:1 ratio of fat to protein and carbohydrate. In this diet, 90% of calories come from fat, 6% from protein, and 4% from carbohydrates.

Following a true classical ketogenic diet is very difficult and requires diligence, careful monitoring, and long-term dedication. A detailed plan is outlined and prescribed by medical professionals who specialize in managing the effects and needs of this diet. Ongoing follow-up care is required with significant nutritional management.

The modified keto diet is less strict. It has macronutrient ratio of 1:1 and 2:1. Medical centers that prescribe this diet also require nutritional supplements to provide micronutrients, electrolyte support, fiber, etc. as well as regularly monitoring of ketosis levels.

In other scenarios, individuals may cycle on and off their version of a keto diet, have higher protein intake, or follow other ratios of nutrients. Other low carb diet variations exist that do not lead to nutritional ketosis.

Clearly, the high fat, high refined carbohydrate, high calorie Western diet with nutrient poor foods is unhealthy and threatens human health. You might quickly lose weight with any of the keto-diet variations, but it comes with risks and concerns. Here are some recent findings to consider.

In a 2018 study, researchers observed the effects of a ketogenic diet and a high fat (Western) diet in animals. Each group underwent a 3-day diet challenge. It was followed with a short fasting period and then glucose or carbohydrates were reintroduced into the diet.

Upon initial examination, the mice fed a keto diet appeared to be healthy while in a fasting state and had some metabolic improvement. Both groups however experienced glucose intolerance when it was reintroduced to the diet.

Further examination showed that the keto diet group experienced more insulin resistance in the liver than the Western diet group. This has also happened in short-duration human studies.

The authors reported that individuals who rigorously follow the keto diet would likely develop minimal issues with insulin resistance and liver function and also experience some metabolic improvements.

They were, however, concerned about individuals who intermittently follow the keto diet as they were deemed more likely to develop insulin resistance in the liver and glucose intolerance. Concerns were expressed about the long-term health for those who cycle on and off keto diets in the general population.

Some of the concerns with the keto diet and insulin resistance stem from whether or not an individual enters sustained ketosis. Ketosis refers to burning fat for fuel rather than glucose. Sustained ketosis promotes more efficient metabolic burning of fats. Scientists suggest that cycling on/off or in/out of ketosis, consuming a high fat keto diet promotes fatty liver and other adverse, pro-inflammatory metabolic changes and insulin resistance - similar to the effects of a high fat Western diet. As keto diet fatty liver build-up progresses, more cell damage and liver disease occurs. This makes me wonder if the “keto-flu” symptoms are related to fatty liver changes.

There is another element related to liver metabolism and the keto diet. Early research shows that a keto diet affects the circadian rhythms and clock gene expression in your liver. Some authors suggest this is helpful for those with serious medical issues, but it is not known how it affects the general population.

It is also unknown how different keto-type diets or if cycling on/off the diet affects the liver clock genes. Studies do tell us however that fatty liver problems are linked with dysregulated circadian mechanisms and gene expressions. This raises questions about the development of fatty liver with the keto diet and its subsequent effects on clock gene expressions.

Other negative metabolic effects have been observed on a low carb, high fat keto diet. Cholesterol imbalances with elevated triglycerides and LDL cholesterol levels, cardiovascular risks, as well as increased leptin levels have developed. In addition, fat accumulation around the kidneys and testes were observed. Increased risk of kidney stones and negative effects during pregnancy and prenatal growth are more likely to occur with a keto diet.

A recent meta-analysis study published in the British Medical Journal showed that the improvements in hemoglobin A1C levels (blood sugar management) diminished after a few months with the keto diet. In their review, they found that the overall lowering of A1C levels was not much different compared to other healthy diets.

The keto-diet effect on gut health is still an underexplored territory. Positive changes have been identified in those following the diet with significant medical needs and serious microbiome dysbiosis. In healthy individuals, the effects are not fully known, however evidence shows that the richness and diversity of the microbiome is impaired.

With the keto diets, several nutritional deficits can easily develop due to the lack of variety and dietary balance. These nutrients include calcium, magnesium, potassium, zinc, copper, B vitamins, fiber and plant-based antioxidants. More information about these concerns and other factors affected may be found in my 2019 article: The Keto Diet: Know the Risks.

Replenishment of the nutrients and fibers missed in a keto diet is one critical aspect of healthy support. Researchers have also identified nutrients that help sustain ketosis or burning fat in the liver and mitochondria for fuel to reduce the risk of fatty liver build up.

Of particular importance are coenzyme A made from vitamin B5 and the amino acid cysteine. Vitamin B5 is also known as pantothenic acid or the coenzyme form – pantethine. Cysteine is found in whey protein and may also be in the form of N-acetyl-cysteine or NAC.

In addition, moderate amounts omega-3 fish oils (EPA and DHA) are also critical to offset fatty liver and other negative metabolic effects. Other helpful plant-based nutrients may include quercetin, resveratrol, and pterostilbene.

Researchers agree though that an unrefined whole foods diet rich in phytonutrients from abundant richly colored vegetables and fruits, beans and legumes, seeds and nuts, cold-water fatty fish and organic grass-fed animal products, and unrefined grains provides superior nutrition to a keto diet. It is more easily adhered to with proven health benefits.

A whole foods diet is more sustainable to incorporate with daily habits. It provides a balanced approach that healthfully supports all parts of your body. It is easier to follow with more variety, better taste, and you get to be in control of your choices. Strive for three meals per day for a healthy, lifelong eating plan such as The Leptin Diet with moderate exercise several times per week.

Low-Fat/No-Fat Diets of the Past

The keto diet is in many ways opposite of the no-fat, low-fat diets that became popular a few decades ago. These diets led to marked inclusion of hidden sugars in products to help taste and palatability. Fake sugars and no-fat diets negatively changed the health of the consumers.

If you have decided to follow the keto diet because of medical issues, work with a practitioner well versed in its short- and long-term needs and challenges. It is not a simple diet to follow. It requires skill, dedication, and monitoring. Researchers agree that well-balanced, whole foods, nutrient rich diet is superior to the keto diet. They also caution that the short-term benefits of a keto diet are outweighed by the long-term risks.

It took decades for professionals to recognize that no/low fat diets do not provide the benefits that were hoped for. Keto diets offer benefits with supervision, but there is more to know. What diet do you adhere to? A nutrient poor, processed foods Western diet? A popular trend that has long-term risks? Or a whole foods diet rich in variety and easy to follow?