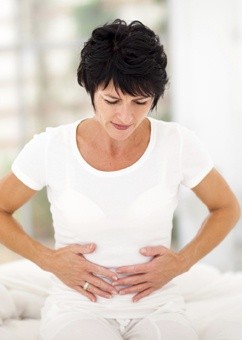 Millions of Americans have heard the words “You have gallstones and need gallbladder surgery”. Gallstones don’t just happen overnight. They silently develop over the course of months and years from various stressors and compromised function. The occurrence of gallstones and gallbladder dysfunction in most cases should not have to resort to the loss of a body part. The opportunity exists to help keep the gallbladder healthy before it reaches the point of severe disease and removal of the organ. One health concern that may unknowingly lead to gallstone formation is impaired thyroid function.

An estimated 10-12 percent of American adults have gallstones. Many do not have active symptoms but have “silent stones”. When symptoms do occur, it may be felt as abdominal pain over the right lower ribcage in line with the nipple. It may refer to the back and right shoulder blade area. Nausea and vomiting may occur, especially after a high-fat meal. The pain is often worse at night and may last for 30 minutes to several hours. In more severe cases there may be inflammation or even infection of the gallbladder. Liver and pancreas inflammation may also occur with severe disease.

Thyroid hormone significantly affects gallbladder metabolism and physiology. When the thyroid gland is underactive, even by just a little bit, it impacts bile acid flow and the gallbladder by several means. One region in gallbladder physiology in particular depends on adequate thyroxine or T4 thyroid hormone. A muscular valve or sphincter called Sphincter of Oddi controls the flow of bile and other digestive juices through ducts from the liver and pancreas into the first part of the small intestine. Relaxation or opening of the sphincter is dependent upon T4 thyroid hormone. If there isn’t enough T4 to trigger thyroid hormone receptors located in the area, then the muscular valve doesn’t fully relax. This prevents or delays emptying of the bile duct and bile starts to crystalize and become gallbladder sludge or stones.

Sluggish thyroid function causes increased gallstones and common bile duct stones in other ways too. Insufficient thyroid hormone decreases cholesterol metabolism within the liver. This leads to increased levels of bile and cholesterol that saturates the liver and gallbladder and over time overwhelms the ducts much like congested rush hour traffic.

Simultaneously, gallbladder contraction slows down and the natural ebb and flow of filling and release of bile acids is compromised. Due to the lack of flow, the bile-cholesterol combination builds up as crystals and sludge which eventually compacts and solidifies into gallstones and/or common bile duct stones.

Mixed in the midst of this, is the Sphincter of Oddi muscle that relies on thyroxine/T4. If the sphincter doesn’t relax, then bile acid secretion is impaired. So an increase in cholesterol bile build-up, sluggish flow, and impaired sphincter relaxation leads to the development of gallbladder sludge and stones occur with minor thyroid changes.

If thyroxine/T4 hormone therapy is provided, researchers note that there is still risk of common bile duct stone formation with long-standing hypothyroidism because of the chronic congestion. This makes prevention and proactive gallbladder and thyroid support a priority and easier to accomplish than cleaning up a long-standing difficulty.

Women are twice as likely as men to experience gallstones. About 25% of women over the age of 60 have gallstones. Women have a higher rate of gallstones which may be related to a higher incidence of thyroid concerns, pregnancy, estrogen and estrogen-based medications. It used to be thought that gallstones were primarily a concern for women in their 40’s, 50’s and 60’s, but the pattern is shifting. Gallbladder problems have been occurring earlier in life even in children, teenagers and those in their 20’s. It correlates with the rising incidence of obesity and diabetes. Autoimmune thyroid disorders have been on rise which often occurs with obesity and diabetes.

Too rapid weight loss and gastric by-pass surgery also contribute to gallstone development. Healthy weight loss should be 1-2 pounds per week. If your New Year’s resolution has led you on a journey invoking rapid weight loss, watch out as you may end up with a bigger gallbladder problem.

There are certainly many other factors like estrogen dominance and medications that contain estrogen, that influence gallbladder function. Proton pump inhibitors or acid blocking medications also increase the risk for gallstones. Estrogen dominance most certainly affects thyroid function and must be appropriately managed. Sedentary lifestyles also increase the risk of gallstones, whereas physical activity helps reduce gallstones and enhances thyroid hormone function.

We need bile acids to help break down fats and absorb them from the digestive tract into circulation for energy, nourishment, repair, hormones, inflammation management, and brain health. However, if bile acid release and amount is compromised, absorption of fat-soluble vitamins and other fats are affected. Loose, greasy stools and fat malabsorption occur. That may not seem like a problem, but these vitamins are involved with many different functions throughout the body including thyroid hormone function, immune system, brain, bone, skin, and heart. Healthy gallbladder function and bile acids are also needed to help clear mold toxins out of the body.

Dietary changes are a must with removal of refined sugar, increase of water intake, increased fiber intake, poly-and monounsaturated fats, avoidance of food allergens, and reduction of grains or even elimination of gluten containing grains. Gluten intolerance and celiac disease affects both hypothyroidism and gallstone formation. Studies show that gluten intolerance can cause cholecystokinin deficiency which is a digestive hormone necessary for natural gallbladder function. Eggs, pork, and onions are the three most common foods that provoke gallbladder symptoms.

Elevated leptin levels are also associated with gallbladder stones and disease. Following the Five Rules with The Leptin Diet helps support leptin and the natural rhythm of the GI tract release of digestive juices.

Unless a body part is severely damaged, I am a fan of keeping all body parts – including the gallbladder. Gallstones are often silent without creating symptoms until there is enough overload to create symptoms. If your gallbladder is acting like a squeaky wheel, it may be time to change the “grease” with diet changes and make sure to have a healthy thyroid.