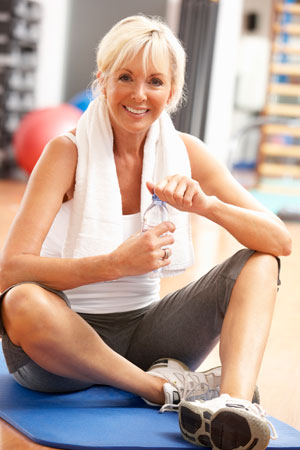 This has the potential to affect millions of individuals, given that SSRIs medications are the most prescribed antidepressants worldwide. Many may be unaware of this risk leading to deterioration of bone health until a fall or fracture occurs. It is imperative to be aware of this adverse risk to make choices for protecting bones and supporting brain health.


Bone health is greatly influenced by serotonin. It’s not just a neurotransmitter for the brain. Many of the exact details are not fully understood as it is incredibly complex, but here are some basic things that we do know. Bones are in constant state of remodeling. Human bone cells have both osteoblasts and osteoclasts that receive serotonin or have serotonin receptor sites. Osteoblasts help build bone, whereas osteoclast help tear down and remodel old bone. About 95 percent of serotonin is produced or synthesized in the digestive tract. The brain produces about five percent. Two distinct genes carry out this function. Serotonin does not cross the blood brain barrier, but rather it is synthesized by a gene in the brain.

This separation has allowed scientists to study the different production sites and have identified very different roles of serotonin. Serotonin circulating outside of the brain has been demonstrated to have negative effects on bones in animal studies, whereas the brain is more of a positive regulator. When serotonin is produced in the body, it acts as a hormone to inhibit or block bone formation. Brain serotonin effects on bone are just the opposite. When serotonin is produced in the brain, it acts as a neurotransmitter to enhance bone formation and limit bone breakdown. The presence of serotonin receptor sites on the bone, serotonin levels, and antidepressants appear to be adversely impacting bone health.


Sixteen years ago, a comprehensive review study on citalopram/Celexa (SSRI), was published in the Journal of Psychiatry and Neuroscience. A total of 74 studies were reviewed leading to the conclusion that “citalopram/Celexa is well tolerated and drug interactions are not a significant concern. It is also reasonably safe for populations vulnerable to pharmacokinetic effects, such as the elderly and patients with metabolic diseases.”

Research published as recent as 2014 determined that escitalopram/Lexapro did not cause bone loss in women. The study was limited to only an eight week time frame. However, on the heels of this study are several studies that doubt the safety of these drugs and demonstrate a significant link between SSRI use and bone loss and fractures. An increasing number of scientists find that SSRI use damages bone health. Use of these medications is associated with decreased bone mineral density and increased fracture risk.

Physicians often gloss over or fail to mention the impact of these drugs on bone health and drug information sheets given to patients upon receiving the SSRI medications omit this adverse effect. Even online sites that provide consumer and professional information about SSRI drugs and bone health fail to fully advise or report on this risk. Unless you dig through the adverse reactions under the professional section of the SSRI medications, under the “premarketing evaluation” section for one drug, it is easy to be unaware of this risk.


A study published in Bones 2012 reviewed evidence on antidepressants, bone health and the trajectory path of impact. After adjusting for various variables like the inflammatory effects of depression, unhealthy behaviors, and other factors that lead to increased bone loss, scientists still found solid evidence that antidepressants negatively impact bone health. They found that SSRI medications and the older tricyclic antidepressants doubled the risk of fractures. SSRI use alone was linked with decreased bone mineral density or osteoporosis. The peak risk for tricyclics occurred at one month into treatment. For SSRIs, the peak occurred at eight months after starting treatment. Only after the drugs had been discontinued for a year did bone health and risk diminish towards baseline. That means the 2014 study listed above that was performed for a mere eight weeks did not and could not identify the risk because of the inadequate evaluation time.

Not only are SSRIs identified with negative changes in bone health, but so are other antidepressants. This includes SNRIs (Selective Norepinephrine Reuptake Inhibitors) and tricyclic antidepressants.

It is important to note that bone turnover and the inner micro-architecture of bones are in a constant state of remodeling. The remodeling process depends on the site and type of bone, but generally it takes several months for the entire process to be completed. It is likely that due to the complexity of bone health, the length of time for bone remodeling, and the length of time it takes antidepressants to take full effect is why it has taken several years to see this problem. Understanding the long-term impacts of medications, the FDA, and drug companies are another issue.

Who’s Most at Risk for Falls and Fractures


A recent study published in August 2016 found that SSRI and tricyclic antidepressant medications accelerated and worsened bone loss in postmenopausal women. Other studies have shown that middle-age women on SSRIs without mental health concerns had higher risk of bone fracture. Elderly individuals on SSRI medications for four years or longer had an 80 percent increased risk of fall and fractures. Citalopram/Celexa was associated with increased risk for falls, whereas fluoxetine/Prozac use caused increased risk for fractures. A 2015 study identified men who use antidepressants and have major depression were much more likely to have lower bone mineral density after adjusting for other factors. Men who used the medications the longest and had lower body weight were more apt to have the greatest risk.


New research published just months ago suggests that SSRI use during pregnancy may also affect bone development in unborn babies. Indeed, there is concern and evidence that fetal development is affected by use of these drugs during pregnancy. There has been an increase in birth defects such craniosynostosis, seizures, and persistent pulmonary hypertension in infants exposed to these medications during pregnancy. Craniosynostosis is a birth defect that causes one or more the bones of the skull to close prematurely before the baby’s brain is fully formed. Based on evidence from cellular studies using human bone stem cells, the authors of this study proposed that SSRI use during pregnancy inhibits bone development by affecting osteoblasts (bone building cells) development and bone stem cells.

Bone loss is also worsened with high blood levels of serotonin and diabetes. This is seen as elevated insulin, glucose, hemoglobin A1C, obesity, and visceral/abdominal fat, the size of beta cells in the pancreas, serum cholesterol and decreased muscle strength. Lab tests may be used to measure blood levels of serotonin. Elevated leptin, leptin resistance, and excess cortisol are part of the picture too. Excess cortisol is implicated in depression.

SSRI medications and other antidepressants are used “off-label” in conditions other than depression, such as anxiety or generalized anxiety disorder, chronic pain management, OCD/obsessive compulsive disorder, migraine headaches, fibromyalgia, premature ejaculation, diabetic neuropathy, and some types of fainting disorders. For the several millions of individuals on SSRI medications and the other antidepressants, it is important to be proactive about bone health. If you rely on this type of medication, use the lowest dose possible for the shortest length of time under your physician’s guidance.

Scientists are warning practitioners to evaluate the risks and clinical choices in prescribing these drugs. Present day knowledge of risks is considerably different than studies from even just a few years ago. Certainly, risks must be thoroughly discussed when facing family planning and pregnancy. In 2012, it was admitted that SSRI antidepressants do more harm than good.