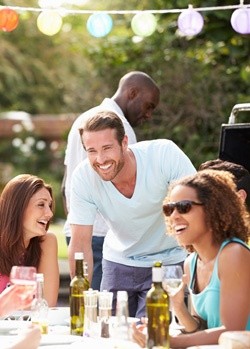 It’s like clock-work. The heavy head, drowsiness and lethargy 30-60 minutes after a meal is a challenge for many. Sleepiness after a meal, often dubbed the “food coma”, is noted as postprandial fatigue. The need for a sudden nap or an afternoon siesta reflects just how hard the body is working to digest food. Managing this drop in energy after eating depends on the fitness and health of the body. Fatigue after a meal happens for a number of reasons. Some may find this as a minor nuisance and requires a little tweaking with dietary choices. For others, it may reflect a bigger underlying problem.


In the typical “food coma” picture one thinks of the Thanksgiving Day feast followed by a long nap. Other common scenarios may be the sudden nap after binging on sugar-rich foods, a big plate of lasagna, or beer and pizza night. Blood sugar swings after the carb loading and reactive hypoglycemia are notorious for causing the drowsiness or crash after the meal. In healthy individuals, the quick fix is cleaning up the diet by reducing or removing high sugar/ high carb foods and replacing them with quality protein, good fats, and complex carbs. Making sure not to overeat at meals is important.

A coffee and donut breakfast mixed in with sleep deprivation, skipping meals all day, and then having a Dr. Jeckyl/ Mr. Hyde dietary upheaval need to be laid aside and forever abandoned if you want to solve this response. Long term struggles with the after meal fatigue may reflect locked in problems with reactive hypoglycemia and insulin resistance. Following The Leptin Diet is helpful to avoid common dietary pitfalls. Those who have a sluggish thyroid are more apt to fall into this pattern as thyroid problems increase the likelihood of insulin resistance.


If you still can’t stay awake after meals despite a healthy diet and lifestyle, there may be some other factors in the picture. The food coma symptoms may actually occur as a result of the blood pressure dropping immediately after meals. This is known as postprandial hypotension and is similar to orthostatic hypotension. It reflects dysfunction of the autonomic nervous system. Blood pressure drops after eating as a result of blood flooding into the complex vascular system of the digestive tract. Overwhelming fatigue, falling asleep on the job, dizziness, even falls, and fainting after a meal may occur within 30 minutes to 2 hours after a meal because of the drop in blood pressure.


Type 1 and Type 2 diabetic patients have a double quandary with postprandial fatigue. Blood sugar difficulties, insulin resistance or insufficiency, and reactive hypoglycemia pose as one cause of the post meal fatigue and energy crashes. In addition, they face potential autonomic nervous system injury from the diabetes that leads to the blood pressure drop after meals. Nerve injury and dysfunctional capillary control happens as a result of the excess sugar and autoimmune inflammation. The worse the blood sugar control, the more one is likely to have significant trouble with “food coma” responses and neurological blood pressure instability. Blood sugar management and nervous system needs must be supported in these circumstances.

Parkinson’s Disease and Other Disorders with Low Blood Pressure


Researchers have noted that the fatigue after meals and low blood pressure may be an early symptom of Parkinson’s disease. Persisting difficulties with low blood pressure and drops in blood pressure with fatigue after meals are seen long-before the tremors and changes in walking occur in Parkinson’s. These symptoms reflect some of the earliest signs of neurological stress and changes in dopamine function and higher oxidative inflammation that may occur several years before the classic symptoms.

Those who have low blood pressure from adrenal insufficiency, cardiac disorders like diastolic heart failure, Postural Orthostatic Tachycardia Syndrome (POTS), multiple sclerosis and other autonomic nervous system disorders may also find themselves struggling with the postprandial hypotension. In these cases, the sheer effort of digestion overwhelms the ability to maintain blood pressure and the result is disabling fatigue that is not always directly related to poor blood sugar regulation.

Seniors and the Elderly


Seniors and elderly who experience the sudden naps after eating reflects not just a “sweet and predictable behavior”, it reflects significant dysfunction. Researchers now provide warnings to the elderly and their caregivers to watch for these drops in blood pressure after eating as it has been recognized as a major cause of illness and even death. Studies show that over 80 percent of elderly individuals struggle with low blood pressure after eating. One study found that 90 percent of those who were living in elder care facilities had very significant problems of postprandial drop in blood pressure than those who still lived at home. The elderly often actually have elevated blood pressure in general, but as soon as meals are consumed, then the blood pressure drops too low and puts them at high risk for falls and fainting.


One other cause of fatigue after meals may be related with changes in the gut motility and “dumping syndrome”. Dumping syndrome may be a side effect related to gastric bypass surgery. Dumping syndrome may also affect those who have not had any type of gastric bypass surgery but it is less common. It is due to very rapid movement of food out of the stomach into the small intestine. When this happens, it can cause a sudden drop in blood sugar (reactive hypoglycemia), causing significant fatigue and weakness. Sometimes diarrhea and feeling faint may occur.


Medical treatment focuses on diabetes medications like arcarbose that slow the spike of blood sugar, which then causes less blood flow to the digestive tract, so blood pressure doesn’t drop so much. Stimulant medications (midodrine, etc) or steroid medications (fludrocortisone) may be used to try and stabilize blood pressure for more severe problems.


Other treatment recommendations focus on consuming larger amounts of fluid, i.e. 500 milliliters or 17 ounces of water rather smaller amounts of 4 ounces with meals. This was found to help prevent blood pressure drops in senior adults versus those 30-40 years younger. The increased fluid intake helped the heart output and tone of the vagus nerve much more so than the smaller fluid intake. While drinking large amounts of fluid with meals may make some feel overly full or interfere with the digestion, in this case it was beneficial.

Dehydration can easily happen in the elderly for a number of reasons and may play a role in low blood pressure. Those who have gastric dumping problems may need to experiment to see what their tolerance is with small or larger amounts of fluid, or ask your medical provider if you have serious problems. Reduce the amount of carbohydrates, especially grains as this has been shown to prevent postprandial hypotension especially in the elderly and integral to diabetes management.

Exercise, such as going for a walk, has been shown to help improve blood pressure stability and prevent it from dropping after eating in senior citizens. It was found that walking after meals for 30 minutes, then resting, and then resuming the walk, helped reduce the drop in systolic blood pressure.

High salt diets and increased fluid intake is recommended for orthostatic hypotension in general. It is now recommended as the first line of therapy for post prandial blood pressure drops. The medical profession commonly recommends a low salt diet for the elderly because of hypertension. But having a higher salt diet as a first line of therapy for those who struggle with significant fatigue after meals appears that at least in this scenario that the medical profession is going back on their universal recommendation of how bad salt is. Salt is not so evil after all.

By stabilizing blood sugar spikes and insulin resistance, you can help prevent blood pressure drops and neurological stress. Getting through the day with sudden food coma naps and fatigue no longer has to shut the diabetic down. Utilizing nutritional tools can help you regain back that missing vitality.

Those affected by these symptoms may gravitate towards foods and beverages that contain caffeine or that cause blood vessels to constrict. Helpful foods may include high salt foods, dark chocolate, black tea, coffee, higher protein and fat containing foods rather than carbohydrates.

Falling asleep after meals can be problematic and even dangerous with driving and may lead to lost work productivity. The thing to keep in mind is that the postprandial fatigue with the elderly or any of the disorders discussed becomes gradually locked in. The stability of the blood sugar regulation and the autonomic nervous system silently breaks down over time. The occasional afternoon energy crash from bad choices slowly ebbs into an almost daily problem. Before it develops into a locked in problem, you can take simple steps with cleaning up the diet up to preventing reactive hypoglycemia.

Ensure some intake of sea salt with higher water intake to help prevent low-grade dehydration that adversely affects the adrenal glands, the tone of the autonomic nervous system, heart contractility, blood vessels contractions and blood volume. As the public has been told to avoid salt, this can have a detrimental effect for many and aggravate the postprandial fatigue. Salt sensitive patients must be careful though and should discuss significant changes with their health care provider.

Falling asleep mid-sentence after a meal doesn’t have to be your new “norm” as you age. It is certainly a wake-up call so you don’t become like many elderly individuals in nursing homes struggling to maintain wakefulness after meals.