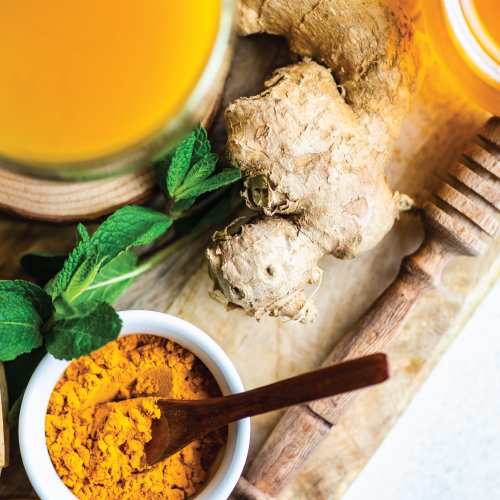 Turmeric, a golden spice, has been used for centuries as a prized dietary spice and in ancient health traditions. This flowering plant of the ginger family has been vigorously studied in attempts to uncover its vast effects on health and protection. Turmeric, with its active ingredients curcuminoids or curcumin, continues to be an all-time favorite multi-purpose nutrient for myself and many across the globe.

If you are taking a turmeric or curcumin supplement, know that the absorption rate varies significantly! In this article, I will explain the recent science as well as highlight the best forms of turmeric to take.

Turmeric/curcumin provides a variety of benefits to healthy metabolic functions in tissues and systems. It is helpful to understand its impact on organs and systems throughout the body. This knowledge empowers your health choices to aid in daily repair and function.

Curcumin affects cell metabolism, repair mechanisms, and mitochondria. It attaches to various proteins that allow it to modulate the activity of cellular compounds. It affects the expression of adhesion molecules and cell survival proteins. Curcumin protects cells against invaders, helps regulate and protect cell proliferation, and affects signaling molecules, inflammatory enzymes, and cytokines. This in turn affects cell integrity, metabolism, repair, and vitality throughout your body.

Curcumin acts as an electron donor to mitochondria, which is necessary for energy production and cell activity. Low dose curcumin promotes the birth of new mitochondria, called mitochondrial biogenesis. Higher doses aid the removal of broken and worn out mitochondria and cells called mitophagy and autophagy. These cleanup processes along with triggering normal cell death, called apoptosis has many benefits for health, repair, and vitality.

Curcumin assists with phase I and phase II detoxification which is clearance of environmental and internally produced toxins. Toxins impede cell repair. Cell studies showed that curcumin is a potent inducer of brown-fat metabolism and can assist in turning white-fat cells into brown-fat. Brown-fat cells have higher metabolic activity than white-fat cells which supports healthy weight management. Many other complex activities have also been found about curcumin’s multiple benefits.

Centuries of use has led to modern science completing thousands of studies on turmeric and curcumin with cell, animal, and human studies and trials. This has led to studies upon studies with extensive evaluation and re-evaluation and ultimately meta-analysis on randomized controlled clinical trials (RCTs). These studies provide the type of evidence that scientists strive for. Review studies also provide highly desirable information. Here are some recent empowering findings.

The British Journal of Sports Medicine 2018 meta-analysis on RCTs with curcumin found statistically significant improvement in joint comfort. Other 2016 systemic meta-analysis on RCTs demonstrated that turmeric supported joint and cartilage health. Intake of turmeric/curcumin was about 1000 mg/day.

Other types of review studies demonstrated turmeric’s effect on skin health. Dietary and oral supplementation of turmeric was shown to support skin health. Positive effects were found in several things like skin tone, acne, aging, irritation, and itchiness and even on body hair.

Curcumin provides antioxidants and promotes healthy repair and inflammation modulation to nerves and brain health. A 2020 meta-analysis demonstrated “significant effect” on mood support with the use of curcumin and may be added to other methods of support.

Other review studies have shown “that curcumin has considerable neuro- and mitochondria-protective properties” against neurotoxic compounds and stressors to the brain. It reduced oxidative stress that heats up and over-stimulates microglia cells. Microglial cells are the workhorse and immune clean-up cells within the brain. It is very important to keep these cells in good shape and not overworked.

Immune and Gut Support and Repair

Historical Ayurvedic use, and current review studies on curcumin, reflects its ability to influence multiple signaling pathways that affect immune system surveillance against germs. Curcumin was shown to inhibit entry and attachment of viral particles to cell membranes. In addition, turmeric provided antioxidant and modulatory actions with inhibition of NF-kappa-B pathway within the gastrointestinal tract.

Reproductive health may benefit by curcumin’s protective effects. Cell studies on prostate health showed that the stress compounds prostaglandin E2 (PGE2) and TNF-alpha were inhibited by curcumin. In ovarian cells, curcumin inhibited other tissue stress markers like VEGF and MMP-9. It triggered cellular apoptosis, or cell death of broken down, misshapen cells in reproductive organs.

High dietary sugar and carbohydrate intake with a sedentary lifestyle leads to fatty build-up within the liver. This makes the liver sluggish, congested, and irritated. RCT studies showed turmeric positively enhanced metabolic activity within the liver which helped alleviate fatty congestion and irritation.

Nutritional science has found ways to by-pass poor or limited absorption that is found with dietary turmeric and even many standardized turmeric extract products. As a result of these break-through improvements, Wellness Resources products now contain either Longvida® Optimized Curcumin or TurmiPure Gold®. Longvida® Curcumin is a unique form of curcumin proven to cross the blood brain barrier. Longvida curcumin is found in Brain Protector.

TurmiPure Gold ® is an advanced turmeric extract with superior curcuminoid absorption and bioavailability. It is shown to be 22 times more bioavailable than standardized turmeric extract with black pepper. It is offered in Repair Plus, which also contains quercetin, bromelain, and papain that support natural repair. It is also available as single ingredient item, Turmeric Gold in capsule or powder.

Here are some additional resources on the topic of curcumin and turmeric. I hope you find turmeric as a favorite supplement, too!