What is the Leptin Diet? 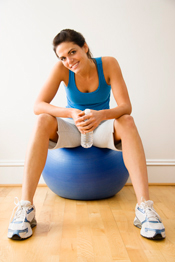 The Leptin Diet® teaches you to maximize your ability to get energy from the food you eat – meaning you can eat less food and feel great. It is the first diet based on the science of leptin, and it is an astoundingly simple and common sense way to eat. It is not a fad diet or calorie manipulation – it is simply an eating lifestyle that makes all the difference in the world.

Eating in harmony with leptin turns out to be the secret to activating your metabolism, even getting a sluggish thyroid back into gear. While leptin is a hormone that is made in your fat, when it enters your brain properly it provides a metabolic go signal. In order to optimize leptin it is just as important when you eat as what you eat.

One major role of leptin is to help you survive a famine, which isn't such a big deal now but was priority number one for a very long time. The leptin your fat produces is like a gas gauge in your car. You have no way of knowing how much fuel is in your car's tank without looking at the gauge. Likewise, your subconscious brain has no idea what you look like in the mirror, it uses the amount of leptin entering your brain as its gas gauge.

Problems occur when you eat in a way that clogs leptin entry into your brain. Snacking is public enemy number one as far as leptin is concerned, as snacking raises your triglycerides too often during the day, in turn clogging leptin entry into your brain. Once this happens you develop a problem called leptin resistance – and your body behaves as if it is starving which means “turn down your thyroid function and run your metabolism in slow motion so that you don't perish from a lack of food.”

In other words, eating the wrong way causes leptin to think you are starving – a faulty perception of starvation. This creates huge problems for your body, making you tired and increasing your food cravings – which lead to weight gain, inflammation, and increased risk for many diseases.

Most diets start out by having you cut calories. This works in most people for a while as your body is set to burn the amount of calories you have been eating. After a few weeks of eating less your metabolism begins to reset to the new amount of calories you are eating, at which point weight loss tends to slow down or stop. If you really restrict calories you induce a true state of starvation.

The problem with losing weight based primarily on calorie restriction is that when you start eating more food, even a normal amount of food, then leptin thinks the starvation period is over and leptin will command that a significant portion of what you are now eating goes back into fat storage. This mechanism was important for survival in earlier times, but in modern times it causes yo-yo dieting.

The way out of this rut is to eat in harmony with leptin so that as you lose weight you are not activating the “starvation machinery” that will slow down your metabolism long before you get to your goal weight and also cause you to gain all the weight back you just lost.

Much is said about insulin resistance and the glycemic index of food. However, leptin is also in charge of insulin. In fact, leptin is the CEO of all hormones in your body. Leptin gives permission for your metabolism to produce energy, and your hormones are the mangers that deploy and distribute that energy.

Science shows that leptin will take feedback from any hormonal system, like any good manager will listen to those he or she is managing. However, leptin always makes the final decision and leptin orders are invariably followed by any hormonal system. Leptin is king of the hill.

Leptin principles extend far beyond basic energy, food, and dieting concepts. There are receptors for leptin all over your heart and circulatory system. Leptin problems are a primary risk factor for heart disease. Leptin is the key hormone that enables the placenta to grow during pregnancy. Leptin levels are higher in women than in men and are intimately involved in all aspects of healthy sexual function as well as the fact that leptin problems directly increase the risk for sex-hormone related cancer in either sex.

Leptin is actually structured as an immune system soldier – meaning it also coordinates your entire immune system response as its commander and chief. Autoimmune problems are invariably linked to leptin malfunction.

When you combine eating in harmony with leptin with high quality food, you are giving yourself the best chance for real health.

While the Leptin Diet is grounded in very detailed metabolic science, the application of it to your life is very easy. Most people simply cannot believe how much better they feel when they consistently follow the five simple rules of The Leptin Diet.

The five rules of the The Leptin Diet are:
Rule 1: Never eat after dinner.
Rule 2: Eat three meals a day.
Rule 3: Do not eat large meals.
Rule 4: Eat a breakfast containing protein.
Rule 5: Reduce the amount of carbohydrates eaten.

When you follow these principles as often and consistently as possible, you will be well on your way to unleashing the metabolic power of leptin. It is truly amazing that dietary principles so simple are so beneficial to your health.

Eating in harmony with leptin can change your life.

For more information follow these free links:
What is Leptin?
The Five Rules of The Leptin Diet®
The Mastering Leptin Lifestyle