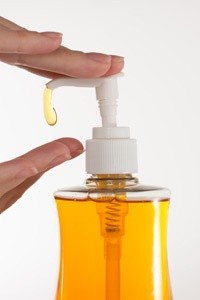 The FDA is sounding alarm bells and the national media has jumped on the bandwagon. Triclosan is no longer flying under the radar like hundreds of others of its toxic chemical friends. Like bisphenol A, triclosan has a bull's-eye on its forehead. This is not only a health story; it is a story of political intrigue. It pits the obesity epidemic against an industry that is helping to cause it.

Triclosan is a germ-killing chemical, so it is not surprising that anything toxic enough to kill germs may have some adverse effects to human health if exposure levels rise high enough. In the past decade triclosan has been added to zillions of consumer products, including the clothes you wear and the cutting boards you use to prepare food. It is commonly in liquid hand soap/body washes, deodorant, facial cleansers, acne treatments, facial moisturizers, toothpaste, shaving cream, and some bar soaps. Such products often noticeably promote “Antibacterial Properties” in bold print on their packaging, and triclosan is typically listed in the small ingredient print when required by law. A comprehensive review of the places you may encounter triclosan has been published on the Environmental Working Group's website.

Animal studies are showing that it is an endocrine-disrupting chemical with a penchant for disrupting thyroid hormone at the level of gene expression. It is worth understanding this issue in a bit more depth.

Mapping the human genome has certainly raised more questions than it has answered. Scientists were hoping to find specific genes causing disease, a simple case of cause and effect Western-medicine thinking. Instead, they have found a massively complex situation wherein genes are incredibly flexible and pliable and prone to being placed at various settings just like you set the thermostat in your house. Once set up in a pattern they often stay that way, for better or for worse.

Almost all man-made chemicals have gotten onto the market through rubber-stamping EPA approval. Similar to the FDA, the EPA's “advisory boards” are made of industry representatives whose vested interest is having chemicals on the market. Chemicals generally pass a flimsy test of not being too cancer causing. The cumulative burden of all approved chemicals on health and the effects of these chemicals on basic human metabolism have not been benchmarks for approval.

Many chemicals interfere with metabolism at levels far lower than a cancer-causing level of exposure. We know from fat tissue samples taken that exposure to everyone is significant as white adipose tissue typically has at least 100 of these toxic chemicals stored within fat – which obviously disturbs the health of the white adipose tissue that is now recognized as a key endocrine organ.

The weak link in your endocrine system, as far as chemical exposure is concerned, is your thyroid. This likely explains why rates of thyroid cancer in America are steadily rising while most other cancer rates are not. Many chemicals like triclosan have chlorinated structures that easily bind to the thyroid gland, displace iodine, or generally cause free radical distress to thyroid gland function that produces thyroiditis. A chronically inflamed gland that has its antioxidant system depleted from chemical exposure is what sets the stage for cancer.

Your liver is the main organ that clears chemicals. It is also the main organ that activates thyroid hormone, turning the T4 produced by your thyroid into active T3, which then goes on to regulate gene function within every cell of your body. Within your liver the conversion of T4 to T3 takes place on the surface of cell membranes, not deep within a cell. This is very important because society's pollution overload has your liver working overtime. If your liver struggles to keep up then cell membranes in your liver are inflamed and their healthy function is disrupted, meaning the conversion of T4 to T3 does not take place at an optimal pace. This is one way your metabolism slows down.

Our new era of gene-related science tells us that optimally functioning thyroid hormone, especially during early development but also as adults, is the key hormone for setting metabolic gene switches in healthy patterns. Once a baby is born metabolism must change dramatically from the constant influx of nutrition via the umbilical cord to regular patterns of eating. In many ways, a newborn baby is like a blank chalkboard in terms of numerous gene settings relating to metabolism. Setting these gene switches properly influences health for a lifetime.

The gene patterns that are trained early in life and throughout childhood are more like computer hardware than computer software, meaning that once they are established and grooved in they tend to stay that way. On the other hand, human genes have more flexibility and plasticity than computer hardware, so there is potential to change settings at any age but it is not a quick-fix activity. Gene switches that are influenced to be set improperly, as happens under the influence of exposure to endocrine-disrupting chemicals, carry a high risk for future obesity and disease.

In animals studies triclosan lowers thyroid hormone1 levels, alters liver function, and interferes with thyroid gene settings during development. Part of its mode of action appears to be stimulating the liver to inappropriately clear thyroid hormone3 out of the body. Even though these are animal studies the gene signaling triclosan interferes with is present in humans. It is one of a generally expanding list of common pollutants that are disturbing thyroid function4 and contributing to metabolic disease.

The “scientists for hire” that represent industry argue that triclosan has been around a long time and has been proven safe. Yes, maybe it doesn't cause cancer or maybe it contributes to thyroid cancer – an issue that would be hard to prove. But it hasn't been proven safe in the context of gene function, tools we now have to help define a new benchmark of safety for human health, especially in the context of the obesity epidemic.

The politics and money involved with this issue is significant – and human health for generations to come hangs in the balance. The chemical industry is sitting on the hot seat because their position, in light of emerging science, is not defensible. They are hoping for delays so as to limit legal liability.

The Obama administration is seemingly doing something in the right direction on this topic, though the FDA warning is almost apologetic and more intended to calm public concern than to reflect the gravity of the situation. In comparison, Republican administrations have typically looked the other way, especially the most recent Bush administration which completely whitewashed the controversy of thyroid-disrupting perchlorate. They actually forced out the EPA scientists who worked on the issue for years and replaced them with administration yes-men. This was done so that our military wouldn't have to spend 50 billion or more cleaning up the problem – a problem which persists to this day. The perchlorate issue is highly problematic to infants, the time at which thyroid hormone is supposed to be setting gene switches for a lifetime. Infants are oftentimes consuming far more perchlorate per pound of body weight than adults because a majority of women in America have perchlorate in their breast milk (triclosan is also commonly in breast milk).

At this point it is too early to tell if Obama's regulatory agencies, the FDA and EPA, will actually do anything effective about the issues of triclosan, bisphenol A or endocrine-disrupting pollution in general. If they do then my hat is off to them. However, the FDA is already dragging its feet, saying they will keep studying the problem for another year before making another proclamation in the spring of 2011. This is oftentimes the cover the FDA uses to help industry reduce legal liability. It also gives time for powerful lobbies to wield undue influence. This issue is worth watching closely because triclosan and bisphenol A represent the tip of an iceberg.

Now that America has a serious obesity epidemic starting it in the face it is high time for the government to do far more than tell people to eat less and exercise more. The government needs to do things that only the government can do. It can begin by getting the most endocrine-disrupting chemicals out of our everyday lives, especially those we come into close physical contact with or ingest.

Glutamine: Critical for Gut, Immune System, and Muscles during Stress and Aging

Fiber and Your Gut Mucousal Lining