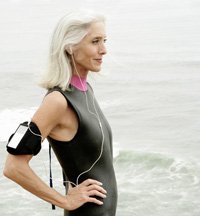 Researchers at the University of California, San Diego, have provided ground-breaking proof that a natural protein called BDNF1 (brain-derived neurotrophic factor) can prevent and treat Alzheimer's. The study was carried out in a variety of animal models including mice, rats, and monkeys.

“The effects of BDNF were potent,” said Mark Tuszynski, MD, PhD, lead researcher. “When we administered BDNF to memory circuits in the brain, we directly stimulated their activity and prevented cell death from the underlying disease.”

The researchers reported that “In each case, when compared with control groups not treated with BDNF, the treated animals demonstrated significant improvement in the performance of a variety of learning and memory tests. Notably, the brains of the treated animals also exhibited restored BDNF gene expression, enhanced cell size, improved cell signaling, and activation of function in neurons that would otherwise have degenerated, compared to untreated animals. These benefits extended to the degenerating hippocampus where short-term memory is processed, one of the first regions of the brain to suffer damage in Alzheimer's disease.”

As I recently reported in my article, Top 10 Health Breakthroughs of 2008, BDNF may well be the molecule of the year, as BDNF is key to keeping your nerve cells alive and stimulating the growth of new nerve cells. Since your nerve cells are important for regulating everything else, keeping them in top working condition not only means that your mind will stay sharp it means you are likely to live longer and healthier. This new study adds significantly to the power of BDNF because it was able to prevent and reverse Alzheimer's independent of the amyloid plaque tangles.

The great news is that BDNF levels can be naturally boosted. Aerobic exercise and nutrition boost BDNF.

It is very important to understand that adverse changes within the brain that eventually result in disease are progressively happening during the aging process. Older adults with sharp memory and cognitive function have far less brain wear and tear than “normal” aging adults who are loosing function and heading in the direction of more serious cognitive decline and potential Alzheimer's. And now it is rather sad to report that Alzheimer's is beginning to happen to adults in their 40s, as individuals burn out their nerves at ever younger ages.

BDNF is the closet thing to the fountain of youth yet discovered.